About 207 cards have already been distributed under IGNOAPS out of a total of 500 applied to the government, while around 117 cards have been given out under MOAPS out of 600. 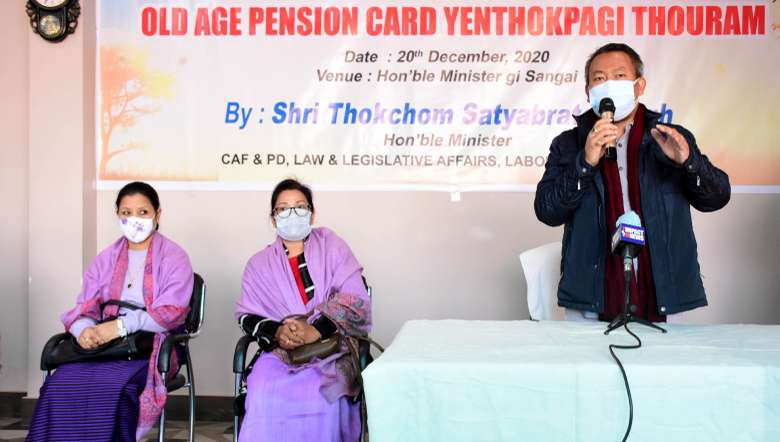 Old Age Pension cards were distributed to about 324 rightful beneficiaries belonging to the different wards of Yaiskul assembly constituency by Yaiskul MLA Thokchom Satyabrata Singh who is also the new CAF and PD, Law Minister of Manipur at his residence, Brahmapur Bhagyabati Leikai Imphal on Sunday.

About 110 persons have got pension cards under the Go to Village mission while about 20 widows received such cards under the One Time Widow Pension Scheme. The amount of the pension under the widow scheme is about Rs 20,000 per widow.

Minister Th Satyabrata said the pension distribution to the old aged people is a big move out of all the social welfare and developmental activities taken up in Yaiskul assembly constituency during his tenure. Go to Village Mission cards, NFSA cards, health-related cards and Ujjwala gas cards have been distributed to the people earlier, he added.

The minister also appealed to the people to shoulder responsibility in supporting the present government that stand for the welfare of the people. “Let us support this government and administration for their long sustenance so that we can continue doing good work for the betterment of the society in future,” he said.

Corporators of Ward No XIX, XVIII and XIV, old age pension beneficiaries and locals of Yaikul Kendrawere were present at the function.

It may be mentioned that a sum of Rs 100 per month has been given to old and aged persons as pension under the Manipur old Age Pension Scheme by the department of Social Welfare, Government of Manipur.