The minister said the present government is always ready to encourage and support such activities that will enhance the economy of the people in remote areas. 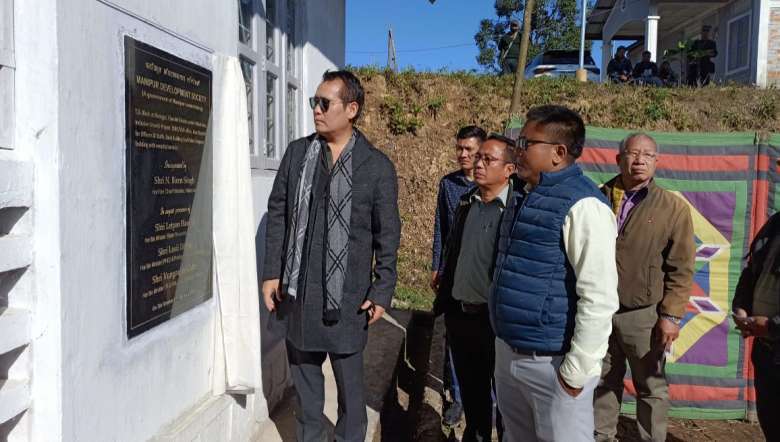 This office building was part of the TD Block at Khengjoi, one of the many projects virtually inaugurated by chief minister N Biren Singh on October 23 from the Durbar Hall of the CM’s Secretariat. Actual shifting and functioning of the said new office started from Friday. The TD Block was constructed under the Tribal Area Inclusive Growth Project and it consists of the BDO/SDO office, quarters for officers and staff, bank building and a police outpost building with security barrack.

The Manipur Development Society (MDS) is the implementing agency and the construction work began in the year 2011.With the inauguration of the new office building, the villagers will now have easier and better access to all the government welfare schemes and in obtaining important documents and certificates. Earlier, the SDO/BDO Khengjoi office was functioning from Chandel district headquarter.

In his speech, Letpao said that the new infrastructure will benefit the residents of the nearby villages, since they no longer have to bear the pain of reaching Chandel town to avail government benefits. He added that benefits will directly reach at the doorsteps of the beneficiaries through this office.

“There is a trend in our state to utilise MLA local area funds mostly in repairing roads and building community halls. These funds should be utilised on other purposes as well, the most important being identifying and developing sustainable livelihood options. This will benefit the people, especially in hilly and less developed areas,” Letpao said.

The minister also appealed to the hill people not to indulge in poppy cultivation, but to shift to other economically viable crops. He said that the present government is always ready to encourage and support such activities that will enhance the economy of the people in remote areas. Also, the government will not tolerate poppy cultivation and carrying out other illegal activities, including contrabands in any part of the state, he added.

He further said that an Indane Gas Service Agency will come up in the area soon, and applauded the assistance of the Indian Army in bringing development and helping people residing in the remote areas.

SDO of Khengjoi, N Shokhongam Baite said that Khengjoi, being situated around 150 km far from Imphal, is one of the least developed regions in the whole of Manipur. With the inauguration of the new office complex there is hope for faster development in the area, he added. The SDO also said that a transit hostel for ST boys, a PHC building, an ICICI bank are some of the infrastructures that will come into this area in the near future.