The veterans affairs in Manipur 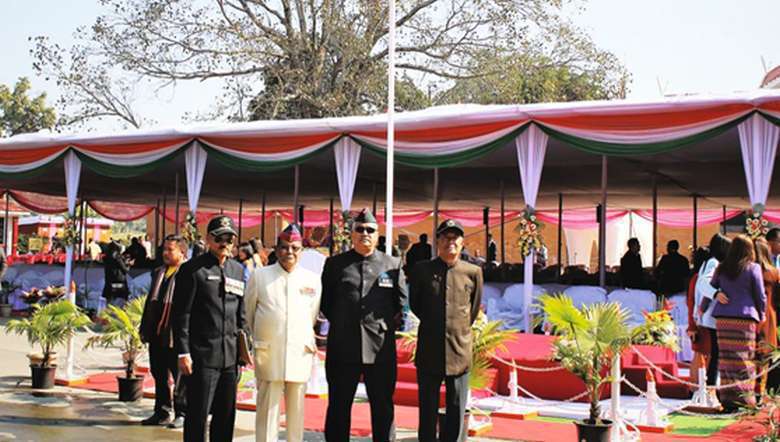 The scenic hill state of Manipur is familiar to most Army personnel. The place is remembered by many, as the ground where many have had our ‘‘Battle Inoculation”, straight after commission. But this small gem of India’s Northeast, has been a powerhouse in national spirit. Manipur has provided large number of international sportspersons to the nation; also proportionately the state has provided a greater share of officers and men into the armed forces.

But Manipuri and other men from the Northeast are basically happy go lucky, and have not been concerned with regard to their entitlements. The veterans themselves had no focal point of interaction, were disunited and concerned only about few basics.

On April 24, 2016, a warm Sunday afternoon, the General Officer Commanding of the local Army formation in Manipur had invited the Ex-Servicemen (ESM) community for an interaction at the beautiful Leimakhong hills. A discussion came up about status of ESM and their facilities in the state. There was usual talk about CSD, ECHS Polyclinic, and Rajya Sainik Board etc.

One issue that came up was the intangible aspect of ESM status in the state. It was realized that the state as a whole, and the people at large were indifferent towards ESM, the state was not harnessing the potential of ESM, nor were ESM involved in any government activities. The general officer, in his wisdom said,

“Why don’t you all elders form an Ex Servicemen Association, in case there isn’t one as yet. That will be a good rallying point to highlight the positives about the armed forces veterans. Besides it may be a formal pressure group for the benefit of all ESMs”.

This cue nudged ESMs into action and very next day we began our work to form an All Manipur Ex Servicemen Association, consisting of members from all ranks including widows, from all districts, hills and valley.

The ESM community in Manipur is estimated to be about 11,000, 70 per cent of them residing in the five hill districts, and the balance about 3,500 residing in the Imphal valley districts. This translates into 65,000 to 66,000 ‘retired fauji families’ and one can safely add another 40,000 active serving ‘fauji families’.

Unfortunately there are a very large number of young widows (about 10 to 15 per cent) within the ESM community. The ESM community had remained subdued and inactive. The passionless and blasé attitude of the authorities from time to time; and at times insouciant and cursory dealings from the parent organisation added to this state of affairs.

Having taken the decision to “do something”, small teams of volunteers reached out to far flung districts and met the ESMs. We had to painstakingly explain to each ESM, to unknown faces and uninterested voices – “We want to form an association; please join us”.

The first response, in most cases, was “What is the benefit”. It was difficult to ‘sell a dream’ to an ESM about something, which we ourselves were not sure of.  We forged ahead relentlessly, and a month later, on May 22, 2016, we had the first meeting of enthusiastic ESMs.

There was a reasonable crowd of approximately 150 ESMs of all ranks, mostly unknown to each other.  They came all the way from the comfort of their homes to participate in something new, hoping to make it work.  In a year, on March 9, 2017, Armed Forces Ex-servicemen Association Manipur (AFESAM) received the official registration certification with the Manipur Societies Registration Act. We started with zero membership. As per last count, in early September 2020, membership has crossed 30 per cent of the total armed forces veterans of Manipur.

The significance of the association is that it became the focal point of all welfare activities of the ESM community. The modest collection of Rs 100/- per annum as membership fee, has not reduced our resolve – to solve our problems by ourselves and for ourselves. The collective will of 3,000 plus ESMs is a dynamic and remarkable source of energy. For us few officers, it was only to provide leadership and direction to the aspirations of the state’s ESMs. We were proceeding in the right direction to alter the past inertia.

- Sorting out priorities: The ESM community, like anywhere the world over, have a common urge –expecting the populace to give a standing ovation, at all times to all veterans. We veterans forget that, having done our time, we are back to the fold of citizens, as ordinary as others in society. There was a need to prioritise our woes and worries into – doable or actionable ones. It had to be- pragmatic, productive and supportive to the ESM community. We decided to focus on healthcare, reviving the interface organization and financial help to deserving persons.

- Healthcare solutions for the veterans: The Armed Forces veterans have an extremely vigorous and useful healthcare system, Ex-servicemen Contributory Health Scheme (ECHS), which is probably the best system in the country. However, in 2015, the two polyclinics in the State were quite dysfunctional, with just about five patients on an average daily, and medicines were often not available. With dynamic leadership, and support of various local Army formations the ECHS Polyclinics have now become nodal centres for ESM welfare. The daily sick report footfall has increased to 30 (six times previous figures) and medicines availability has improved vastly. Today we dispense medicine worth Rs 9 lakh per month, including for cancer patients, anti hepatitis viral drugs, chronic kidney disease, post renal treatment, etc. Not a single patient has gone back empty-handed or returned dejected due to lack of medicines. Controlled quantities of Anti rabies medicines and polyvalent anti snake venom (ASV i.e. effective against all the four common species; Russell’s viper, common cobra, common Krait and saw-scaled viper) are kept under strict supervision for any emergency. The mini pharmacy ensures the availability of medicines ranging from Amlodipine (Rs 1 /- per tab) to tab Lenvatinib for thyroid cancer costing Rs 1.90 lakh per month’s dose. This is the story of a simple yet significant transformation of a humble ECHS Polyclinic at, Imphal. These are changes that the team has been able to bring about – To bring smiles to many a veteran.

- The Interface Organisation: Every state and union territory is supposed to have a fully functional Rajya Sainik Board and Zilla Sainik Boards. The basic function of Rajya Sainik Board is to be the interface of the ESMs vis-à-vis state government/regimental centres/local military authorities. The Rajya Sainik Board was largely defunct, with no clerical staff.  The office building was in a dilapidated condition due to lack of funds for repairs and upkeep. Churachandpur Zilla Sainik Board had no office. With AFESAM becoming an effective representative voice, a new secretary Rajya Sainik Board, Col SK Sharma, (Retd) was officially appointed through the Manipur Public Service Commission. Working as a one- man- office, he looks after the interests of the 11,000 ESMs of the state and their families. The state government is yet to respond kindly to the constant pleas to provide bare minimum office staff,  hence the ESM community ourselves employed a retired Subedar Major as office clerk, without a salary or any benefit. For the past 18 months, he works as a volunteer from the ESM community.

The energies and activism of AFESAM succeeded in attracting interest of few cabinet ministers of the state government. On June 1, 2019, the education minister of the state donated a handsome amount of Rs 10 lakh and few more donations came in ranging from Rs 10,000 to 1 lakh. The contributions that trickled in from few ministers, MLAs, were used to create the foundation of a dream – “Ex Servicemen Memorial Park” inside the complex of Rajya Sainik Board, Manipur. Within 40 days, An ‘Altar For The Brave’ was constructed with these donations and unveiled on 21 July 2019.

On these occasions, all state capitals have an ESM contingent marching at the head of a parade. Manipur probably had been one example where there was a very rudimentary presence of the ESMs. This changed in 2019. 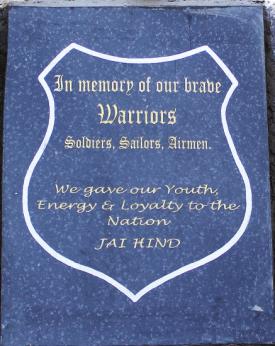 On January 26, 2019, a proud contingent of 60 ESM of Manipur, leading the parade, marched past the saluting dais. The contingent came from all districts of the state, camped in the Rajya Sainik Board premises for five days; all expenses were borne by the not so rich ESM Association, AFESAM. The 16th Governor of Manipur, Najma Akbar Ali Heptulla reciprocated the smart salute from Hony Capt Hausuan Mang, Sena Medal (Assam Regt), leading the ESM contingent, clad in blacks with the glittering medals and ribbons on their breast pockets. Similar parades were also held in all district HQs with the ESM contingents leading. The same standards were repeated on August 15, 2019 and January 26, 2020.

With the Sainik Welfare organisations becoming more effective, needy ESM and widows have benefitted with financial assistance released to them as warranted. The AFESAM has networked well with the Command HQ and local formations, which have also provided much needed financial support. As per a resolution of AFESAM, immediate financial assistance of Rs 5,000/- is given to the next of kin of a deceased ESM and an obituary is also taken out in local media for the deceased. Here too, we the ESM community have made these changes for and by ourselves. This step has enhanced the pride amongst the ESM and contributed to lifting their status in society. AFESAM has been an interface with NGOs, who have been forthcoming in helping out needy ESM. Mention may be made of Atharva Foundation of Shri Sunil Rane of Mumbai, who recently donated a fully equipped Ambulance and computers, wheelchair etc., for the needy ESM of Churachandpur District of Manipur. Besides these individual initiatives, the ECHS polyclinic also erected a Green House in its premises. Exquisite varieties of orchids from the hills of Manipur adorn the bamboo racks in the green house. Thus, Veteran Affairs have gained substantially, once the ESM community has developed a united voice and forum. The ECHS Polyclinic is now a happening and active community service centre and adds phenomenally to social wellbeing. The changes, tangible or otherwise, for the ESM of the state, have begun. However, there’s a lot more to be done.

The woods are lovely, dark and deep,

But I have promises to keep,

And miles to go before I sleep,

And miles to go before I sleep.