Awangbou also said that his visit to different seri farms and interaction with seri farmers have motivated him to find other ways and means to help the farmers. 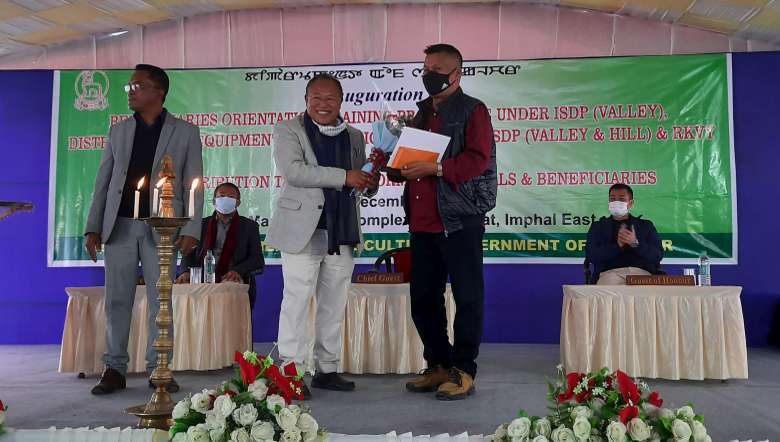 Manipur Sericulture Minister Awangbou Newmai on Friday said that the Sericulture department is different from other departments in the state since its employees have to encourage the public towards self-employment. The employees also have to carry out field visits and supervise the farmers and beneficiaries in different areas, he said.

The minister was speaking as the chief guest at the inauguration of beneficiaries orientation programme under the Integrated Sericulture Development Project (ISDP) valley and distribution of equipment to beneficiaries under ISDP (valley and hill) and Rashtriya Krishi Vikas Yojana at Sangaipat, Imphal East.

The number of employees in the department is only half of what is required. However, the employees have been performing their duties well enough, said the minister. Appreciating the role and services of the employees, he exhorted the employees to perform for the welfare of the public and the state as a whole.

Apart from the schemes provided by the department, Awangbou also said that his visit to different seri farms and interaction with seri farmers have motivated him to find other ways and means to help the farmers. He said that the same has been intimated to the officials of the department so that the farmers can promote themselves through seri farming.

The minister also appealed to the beneficiaries to encourage their neighbours to practice seri farming. A successful seri farmer can generate more income with lesser labour than other farming options. Besides, the climatic condition of the state is favourable for seri farming but the state has not been able to produce enough for export, he stated.

Speaking as the guest of honour, chairman of Manipur Building and Other Construction Workers Welfare Board Heikham Dingo Singh said that the state has no resources of its own. As such, improving the sericulture sector will help in employment generation and boosting the state’s economy, he added.

Commissioner, Sericulture Nidhi Kesarvani said that the programme has been organised to motivate the farmers and beneficiaries to work better and to make sure that the employees of the department ensure the schemes are completed.

Best performing officials of the sericulture department and beneficiaries were also awarded during the function.