The celebration was held on the theme ‘Women for Greater Change’ at its head office campus, Lamrinkhuw village, Chandel district. 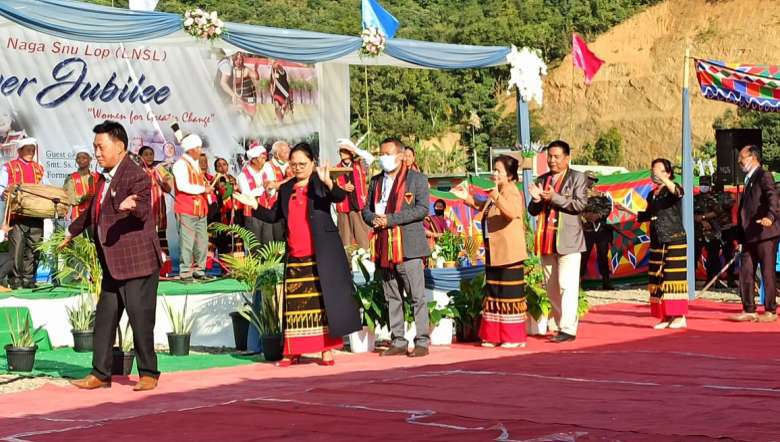 As the Lamkang Naga Snu Lop (LNSL) completes 25 years of its developmental activities, a silver jubilee celebration was held on the theme ‘Women for Greater Change’ at its head office campus, Lamrinkhuw village, Chandel district to mark the grand event on Tuesday.

The Lamkang Naga Women’s Union was born in 1995 with the sole purpose of uplifting women in our society. The LNSL has come a long way through many years of manifold experiences and various noble activities for the empowerment of Lamkang womenfolk. Since its inception, they have been regularly participating in various seminars, workshops and training programmes. They also take part in Lui-Ngai-Ni and meetings of Naga Women Union from time to time.

Appreciating the women leaders who are like a mother to him, Tribal Affairs and Hills Minister Vungzagin Valte drew the attention of the audience saying that as Lamkang is an important location of Manipur, it can help bridge the hill-valley divide. The minister also stressed on the vital role and immense contribution of women in the society. He lauded the responsibilities they undertake to execute their responsibilities effectively in all spheres. He also continued that the public of Chandel are fortunate to have a women leader like Olish both in terms of political and social work.

CAF and PD minister Thokchom Satyabrata Singh assured that it was a proud and happy moment for the Lamkang Naga Snu Lop as they complete the 25th Anniversary today. “I will try my level best to put into action the memorandum of establishing an office for the LNSL as soon as possible,” he added.

Minister Valte unfurled the LNSL flag while minister Satyabrata unveiled the monolith erected to commemorate the silver jubilee celebration. A souvenir was also released by former president LNSL Ss Olish during the function.

Balloon release, prayer, cultural items, folklores, melodious songs and traditional attire parades were some of the showstoppers of the event.