In my acquaintance with Indian theatre directors from Northeast region, there were three prominent figures with whom I had fruitful conversations during my visits to NSD. One was a theatre and film actor Adil Hussain. Other two were Heisnam Kanhailal and Ratan Thiyam, writes Saumya Liyanage 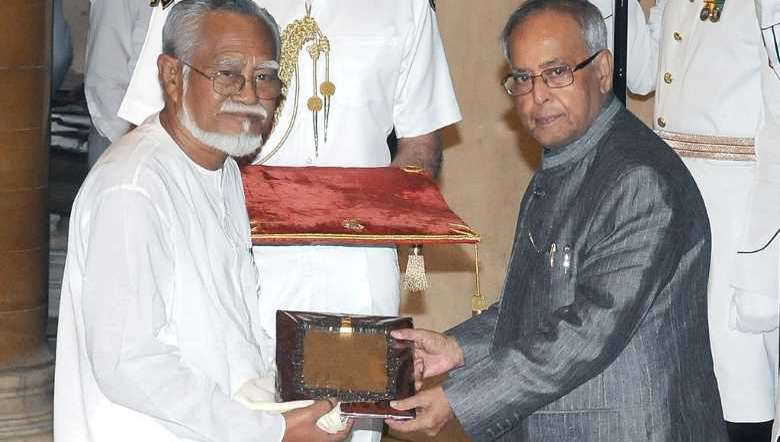 One of my closest friends who were a student at the National School of Drama (NSD) New Delhi, India, Victor Thoudam was about to launch his latest performance in Imphal, Manipur amid covid-19 pandemic. I contacted Victor to congratulate on his work. During our conversation, I asked about Kanhailal, a visionary director and writer I met in 2010 in New Delhi. Then he replied: “Kanhailal is no more with us, Saumya”. I was saddened and felt lost, remembering the short but worthy conversation I had with the maestro in the early winter days of 2010 at the NSD. In my acquaintance with Indian theatre directors from Northeast region, there were three prominent figures with whom I had fruitful conversations during my visits to NSD. One was a theatre and film actor Adil Hussain. Other two were Heisnam Kanhailal and Ratan Thiyam. Since 2010, I had on and off connections with my Indian colleagues and nobody informed me that Kanhailal had passed away. Then I asked Victor about Ratan Thiyam. “He is getting old but is still active in theatre”. He replied.

It was wintertime in New Delhi and the chilling wind was unbearable when travelling at night in a trishaw to see a play or a movie at a theatre. But Bharath Rang Mahotsav (BRM), the International Theatre Festival organised by the NSD provided warmth and the motivation for me to witness regional and global theatre trends. The International theatre festival was in flight at several theatres around the school including Abhimunch, theatre productions from all over the world and every part of India were staging every night.

After watching plays at night, students, teachers, actors, and directors gather outside school premises, alongside a bonfire, sipping milk tea and eating samosas, discussing what they see at night in the theatre. During such an occasion, my colleagues at NSD, Professor Robindas, and Adil Hussain insisted me to watch a play from Manipur region. The Director was Heisnam Kanhailal. During my breakfast at the crowded canteen of the NSD, students also persuaded me to see Kanhailal’s production and Ratan’s adaptation of Henrik Ibsen’s last play When We Dead Awaken. NSD staff was generous enough to provide me with free tickets to watch all the plays of the festival.

This was the first time that I saw Ratan Thiyam’s theatre work. The hall was packed with students, theatregoers, critics, and laymen. Some spectators were even sitting on the floor. Ratan Thiyam was very famous among Delhi spectators and everyone was eagerly waiting to see his new theatrical intervention. I was mesmerized by Ratan Thiyam’s theatrical approach to Ibsen’s play. It was adapted and produced in a Manipurian style with mind-blowing sets and costumes. Ratan’s actors, their physical rigour in performing on stage was unforgettable and long-lasting. But critics like Rustom Bharucha argues that Ratan’s theatre is more festival centric and elaborate colours and sets which overpowers the real essence of his theatre. As Bharucha further emphasizes, Ratan Thiyam creates a theatrical extravaganza or an ‘invented tradition’ through which an imagined ‘Manipuriness’ and indigeneity is created for the cultural centres such as New Delhi and elsewhere.

Twice in my life, I was stunned by the theatre. The first one is the play titled Othello in Black and White directed by Royston Abel. It was staged at the BRM festival before 2010. I don’t remember the exact date or year now. My colleague Adil Hussain played the key role in it. His mesmerizing performance as Othello galvanized my senses. The second time I was attracted by a Manipur play, adapted from a folk tale and directed by Heisnam Kanhailal.

The play was very simple and minimalistic. The key role was played by a matured actress. Later I found that she is the collaborator and lifelong partner of Kanhailal’s plays, Sabitri. Today I have a vague visual reminder of the play as I have seen this production way back in 2010. But my corporeal memory is still with me. When Artaud writes how an actor should impact upon the audience member and should vibrate her body similar to a serpent feeling the vibration of the floor, Sabitri’s lyrical body and stylised movements directly talked to my body. Rejecting the mundane theatre conventions, Kanhailal’s actors used human voice, in its fullest capacity, tonal variations, and the lyrical body movements to convey grave meanings of a human story. This masterpiece exceeded my generic understanding of proscenium theatre and excelled a vibratory theatrical experience with a minimum effort of extraordinary theatre effects.

After watching this play, I was eagerly waiting to have a discussion with Kanhailal. My friend Victor came the following day with a photocopied book. It was about Kanhailal’s theatre practice written by Prof. Rustom Bharucha. It was The Theatre of Kanhailal: Pebet & Memoirs of Africa (1992). Because it was out of print, Victor had photocopied it for my reference. It was a precious present for me as I started reading Kanhailal’s theatre career and his practice. With the support of NSD staff, I managed to get an appointment from Kanhailal. I met him at the NSD with his wife Sabitri and had a long discussion about his theatre, his beliefs, his practice, and training regime of actors in Kalakshetra Manipur, theatre ensemble located in Imphal, Manipur.

For Bharucha, Kanhailal’s ‘poor theatre’ (poor theatre in the sense of not using excessive theatre technology or other auxiliary material) is a powerful political idiom which captures the indigenous sentiment and oppression of people living in Manipur. Writing about Kanhailal ’s famous theatre work Pebet (1975), Bharucha contends that as a theatre director, Kanhailal questions the idea of Janmabhumi, the patriotic ideology created by the dominants, used as an oppressive tool to suppress the marginalised communities. In this play, mother Pebet (a small extinct bird) is disgracefully attacked by her own children after being manipulated by her opponents.

Kanhailal and Sabitri conducted several actor training sessions for graduate students during my stay at the NSD. These sessions consisted of learning from nature and working with various natural metaphors to create imaginative bodily movements. Kanhailal discussed and explained things with students while Sabitri demonstrated all the exercises they discussed. One of the exciting acting exercises that I observed was walking in a water stream upwards. Sabitri’s body was such a flexible tool though she was in her later fifties at the time. She started showing students how to walk upstream in the water by imagining and imitating the water and resisting water through her body. Students then asked to imitate Sabitri and her body movements. The workshop went for two hours followed by a discussion.

Similar to other theatre practitioners in the new era of Indian theatre, Kanhailal has been inspired by European Avant Guards such as Grotowski’s corporeal theatre and also Badal Sirkar’s approaches to communal theatre coined as ‘third theatre’ in India. While his contemporary theatre director Ratan Thiyam’s theatre was criticised as ‘reinvention of tradition’ and brought to please for the cultural centres in India, Kanhailal’s theatre is minimalistic and dominates non-verbal theatricalities opposed to the established proscenium, middle-class theatres.

However, Bharucha is critical about being non-verbal and the domination and overemphasis of pre-expressivity of Kanhailal’s theatre. As he argues ‘Kanhailal seems to have overstressed non-verbalism and the physicality of his actor’s training at the expense of confronting the spoken word […] The instincts and reflexes of Kanhailal’s actors are extremely sharp, but their minds have been somewhat numbed by their essentially dream-like response to performance’. Kanhailal’s theatre is incomparable to many theatre writers and producers on the basis that he borrows most of his materials from his inherent Meitei tradition and its folklore. Yet these folk tales and fables are transformed into political idioms through lyrical and corporeal works of actors. As a theatre producer, Kanhailal rejects elaborate sets, costumes, music, stage props, makeup, or stage light. His theatre can be performed either on conventional proscenium theatre or any space where people can gather around. This simplistic and minimalistic nature has heightened the emphasis of actors’ contribution, their mannerisms, and vocal capacity to grip the audience than any other theatrical artefacts. Hence, Kanhailal creates a powerful and unique theatre mode through which our senses are filled with a novel theatrical experience.

Kanhailal’s theatre and Sabitri’s performances have been well received by many critics, theatre scholars in India and abroad. Kanhailal and his collaborative partner Sabitri have created over twenty productions in their theatre career. Most of these productions have been performed in major cities in India and been represented International theatre festivals. Sabitri as an actor has received many awards and accolades in her acting career including Best Actress awards at Cairo International Theatre Festival, Natya Rathna and other state awards.

Working and dedicating one’s life and energy to sustain a community-based theatre is a difficult exercise. Kanhailal and Sabitri have both succeeded in this endeavour. Many NSD graduates have been attracted to more popular entertainment industries such as television and cinema. But theatre artists such as Ratan Thiyam or Kanhailal were not drawn towards those popular expressions. They have dedicated their lives to create ephemeral arts which cannot be preserved in its original quality in another form. Yet, their stories, expressions, and corporeal presence are still alive and vibrate in our bodies when we remember them from time to time.

(This article was first published in Colombo Telegraph. The views expressed are the writer’s own)

Pena - the mesmerising, and the fascinating social view

The writer is a theatre scholar based in Colombo. This article was first published in Colombo Telegraph. The views expressed are the writer’s own)