Manipur: Call for change in social system to minimise impact on gender equality

Several members, speaking at the programme organised by the CSD and WAD at Sangaiprou on Friday, recommended the government to set up a gender policy 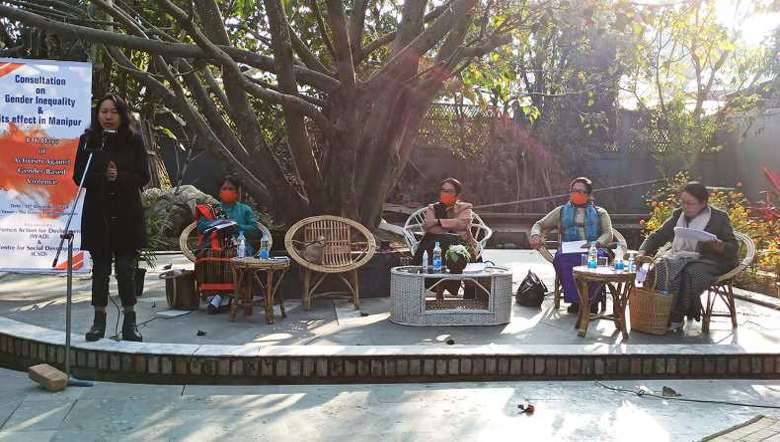 Consultation on Gender Inequality and its Effect in Manipur (PHOTO IFP)

Wearing orange facemasks as a symbol of a brighter future free of violence, members of the Centre for Social Development (CSD) and Women Action for Development (WAD) called for a change in society at a programme held at Sangaiprou in Imphal West, Manipur.

Several members, speaking at 'Consultation on Gender Inequality and its Effect in Manipur' organised by the CSD and WAD on Friday, pointed out that the rooted patriarchal system of Manipur has caused various violations of women rights and called for a change in society to minimise the impacts of patriarchal system on gender equality. They also highlighted some serious cases of atrocities against women in the state.

CSD project manager Phamila Tuithang said that there have been incidents of women being tortured by their husbands because they cannot deliver a male child. These men sometimes take a second wife, adding more to the emotional trauma of the victim, she said.

Tuithang also pointed out that though a woman cannot decide the gender of a child, they are often blamed when they cannot deliver a female child. These women are often divorced and also separated from their children, she said.

Such women sometimes take the wrong path like using drugs, Tuithang said, adding that most of the women who use drugs are engaged with such domestic violence in the state.

According to social activist Priyadarshini Gangte said, the significant role of women is not understood in the state. The deeply rooted patriarchal system is being followed by women, not only men, she said.

Stressing the need to protect the next generation from gender-based violence, Gangte said giving education is highly essential in school and colleges, as change should come from education. Old-aged people who are sticking on the patriarchal system would not be able to bring any change, she added.

Meanwhile, clinical psychologist Paonam Thoibi highlighted the need for clinical assessment and intervention for people who are encountering gender inequality with special reference to women and girls.

The abortion rate and female foeticide in the state is also high as pointed out by Journalist Liklai Leima who shared a report on it.

In Manipur, the birth rate of girls is reducing according to the Civil Registration system report, Thoibi said, adding that girl child abortion is Manipur is reportedly still going on with the help of ASHAs workers. There are 166 diagnostic clinics in the state, among them ASHAs and doctors reportedly have a connection in the practice of girl child abortion, she added.

During the consultation programme, which was moderated by United NGO Mission Manipur (UNMM) president Jibanmala, victims of various crimes also shared their testimonies and experiences. Following the sharing and discussion, the programme recommended several points to be submitted to the authorities concerned.

The recommendations included the following points:

3. Review all school textbooks of Manipur where women are portrayed in a degrading way

4. Include gender issues in the syllabus and curriculum right from the primary level

5. Appoint women judges in every district and redress problems of street vendors

8. Speed up compensation to all the pending victims of crime against women

9. Introduce a policy to respond to all prevailing reproductive health situations to improve the standard of living and quality of life of women and bridge the inequality gaps.