The agreement between the two neighbouring countries was made at the 5th India-Myanmar Bilateral Meeting held virtually. 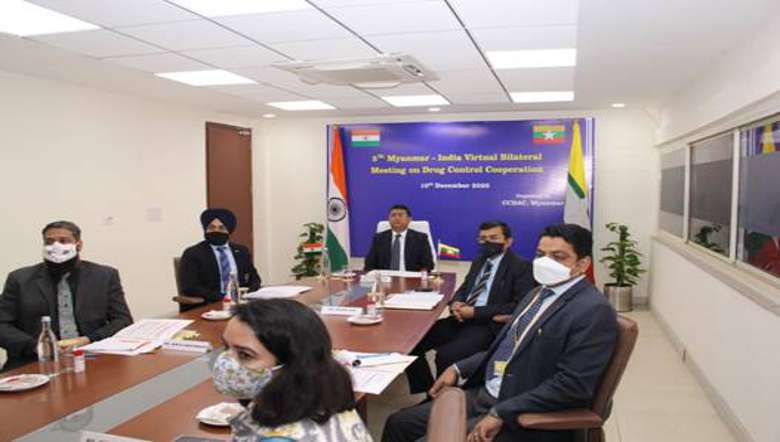 India and Myanmar have agreed on the exchange of intelligence information in a timely manner to conduct follow-up investigation in drug seizure cases, new psychotropic substances and their precursors, the Union Home Ministry said.

The agreement between the two neighbouring countries was made at the 5th India-Myanmar Bilateral Meeting on Drug Control Cooperation between the Narcotics Control Bureau (NCB), India and the Central Committee on Drug Abuse Control, Myanmar held virtually on December 10, 2020.

The ministry also said the two countries agreed to conduct Border Level Officers/Field Level Officers meetings on regular basis between frontline officers to strengthen the existing cooperation on drug law enforcement. It was decided to exchange information on illegal entry and exit points of illicit drug trafficking on the Myanmar-India borders and information on the technology being used to interdict drug trafficking.

New Challenge for both India, Myanmar

Highlighting issues of trafficking of Heroin and Amphetamine Type Stimulants (ATS) among others in the country, Asthana said that “high prevalence of drug abuse” in the Northeastern States abutting the Myanmar border is a major cause of concern for India.

Asthana said that apart from porosity of the India-Myanmar border, drug trafficking through the maritime route in the Bay of Bengal has emerged as a new challenge for both countries. NCB has remained committed to strengthening the existing mechanism of sharing information and assistance with Myanmar, for combating the drug menace in the region, he said.

Commander of DED, Pol. Brig. Gen. Win Naing elaborated on the growing threat of the production of yaba tablets (methamphetamine) which has caused grave concern in the region, though the cooperation mechanism between Myanmar and India has been enhanced over the past years. He urged India to develop frequent information exchange on the trafficking of drugs and precursor smuggling activities at every level. The Commander of the DED complimented the Government of India and the NCB for their continuous efforts to combat the growing threat of the drug menace.

The meeting concluded with the decision to hold the 6th India - Myanmar Bilateral Meeting on Drug Control Cooperation in India in 2021, the ministry added.