‘Human rights is much needed in democracy’ 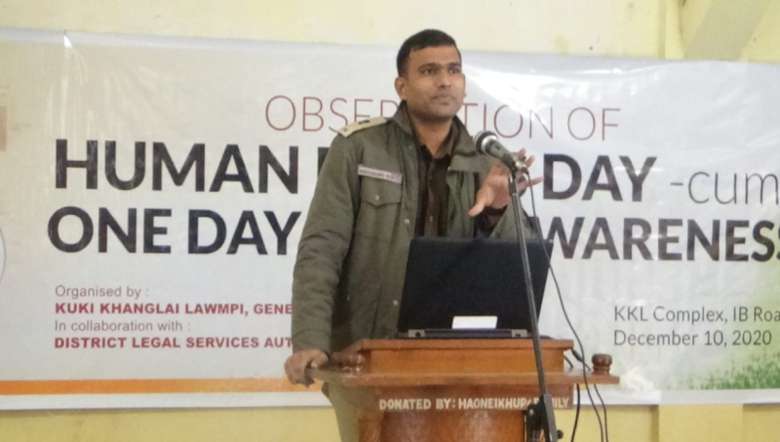 The programme was attended by CJM of Churachandpur, Janggoulen Haokip and additional SP, Srivanant Surve as resource persons.

Various intellectuals and leaders of CVOs including Kuki Students’ Organisation (KSO) also took part in the observance where the president of KKL, Khamthang Haokip delivered the welcome speech, followed by an interaction session among the participants.

The additional SP, who is presently the SP in-charge of Churachandpur, spoke on the concept of human rights and said that it is much needed in a democracy. He also talked about the principle of natural justice where all have equal rights and that no one can be punished for the same offence twice which he said was unfortunately prevalent in many societies including Churachandpur.

On the topic of criminal law, Srivanant Surve told the participants to have a clear knowledge about what is cognizable and non-cognizable an offence which he explained to them that there are certain instances when the police cannot register an FIR but need direction from the court.

He continued that the police cannot directly handcuff a person as it is against human rights unless the person tries to escape. The SP in-charge also talked about ‘Broken Windows Theory’ which means once one glass of a window is broken there is a tendency that others will be broken too. He further explained that if a minor crime is left unattended, it has a tendency to get extreme, for example, if eve-teasing if left unattended, it may lead to sexual harassment, rape and murders.

The CJM spoke on cybersecurity and its connection with the law. He mentioned about the cyber terrorism that happened on November 24, 2014 in the US in which Sony Pictures was virtually paralysed when their website was hacked. He continued that nowadays everyone uses Smartphones and in one way or another people commit cybercrime subconsciously when they post something in their profile pages. Ignorance of the law is not an excuse in a court of law and all must be aware of this as 90 per cent of cyber crime can be solved if one knows how to proceed, he added.

Janggoulen Haokip also spoke in detail about the danger of strangers in social network platforms like ‘Facebook’. He also pointed out various sections of IT Act like section 43(a), 43 (b) and others, under which a person is punishable for three years with fine of one lakh rupees and beyond. One can be a criminal in cyberspace without being aware of what he or she is actually doing, he added.