The resolution was announced during a sit-in protest held at Manipur University, Imphal on Wednesday condemning the "irresponsible act" of the Union Education Ministry in keeping the post of VC vacant for 10 days. 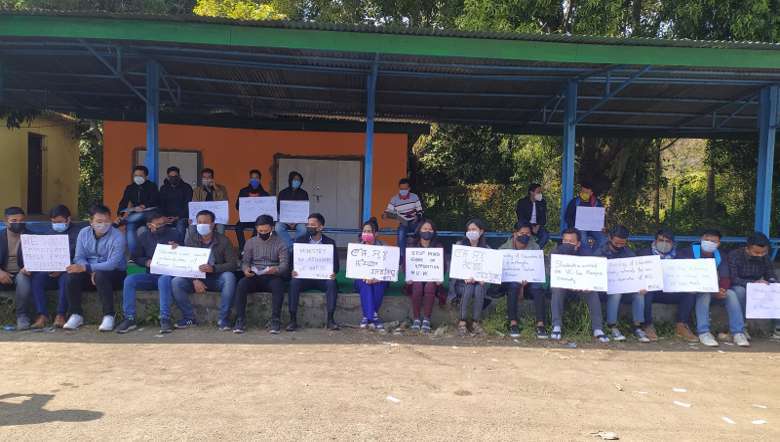 Various student bodies in Manipur have resolved to launch intense agitations if the Union Education Ministry failed to appoint regular or interim vice-chancellor of Manipur University within December 14.

The resolution was announced during a sit-in protest held at Manipur University, Imphal on Wednesday condemning the "irresponsible act" of the Union Education Ministry in keeping the post of VC vacant for 10 days.

Speaking to the media on the sidelines of the protest, MUSU president M Boby said that the post of VC has been vacant since December 1. As such, the students are demanding to fill the vacant post or make an interim arrangement. However, the Union Education Ministry is not translating the demand into action even after the completion of 10 days, he contended.

“As the VC post is vacant for almost 10 days, many official works are being paralysed. Besides, due to agitation demanding appointment of regular or interim VC, the campus remains unstable. Despite having so many problems, the union ministry not taking up any concrete decision is very unfortunate. Such act has made us to question the way of treatment towards us by the central government,” he stated.

Boby further said that inaction by the ministry for almost 10 days clearly shows the government's negligence and disinterest in the issue.

The various student bodies will jointly intensify the agitations and may even call total shutdown if the demand is not fulfilled within the stipulated time. The students union also resolved to send a memorandum to concerned Union ministry in this regard on Wednesday itself through registrar of Manipur University, the MUSU president added.

Opposing the letter from the ministry not to handover VC charge to anybody until and unless a specific order is released from the ministry, Boby stated that as per the Manipur University Act 2005, the seniormost professor of the university can take charge of VC if the post is vacant.

But the ministry, urging not to handover VC charge to anybody unless specific order is released by it, is a complete violation of the Act, he added.

MU Row - the tragedy of being headless