The Holy Bible was distributed among the Thadou-speaking people by the Thadou Christian Literature Society after it was momentously released by chairman of Ordination Committee, TBA-India, Rev Th Kipgen. 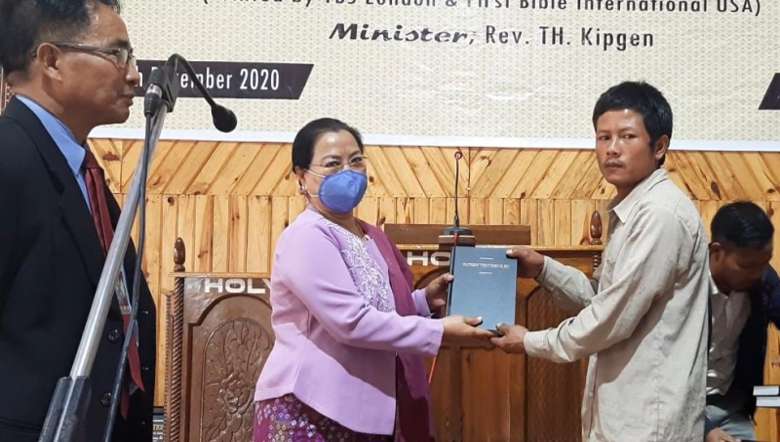 A one-minute silence was observed as a mark of paying homage to the pioneer translators of the Thadou Holy Bible led by Rev K Hangshing. A video message was also sent from Trinitarian Bible Society, London and First Bible International of Milford, and later a brief history of Thadou Holy Bible was highlighted.

Sitlhou maintained that the western countries began to develop when they read the Bible 60 years ago. The Thadou society will also begin developing when they start reading the Bible in their own dialect and live with the holy words, he added.

Nemcha Kipgen in her speech conveyed her gratitude to the Trinitarian Bible Society, London and the First Bible International of Milford, Ohio for their marvellous work in spreading the Gospel of His (God's) holy words across the globe. She also said that anyone who reads the newly published Thadou Holy Bible will find peace, hope in times of despair, light in times of darkness and joy in times of toughest days.

The former minister also appreciated the self-sacrifice and contribution of the Thadou Christian Literature Society especially Vumthang Sitlhou, donors, pioneer translators and their family members, and all others who have contributed to the publication of the Thadou Holy Bible.

Earlier, the Thadou Holy Bible was released by Rev Th Kipgen after it was brought inside the Church in Talai by three reverends and later it was distributed among the Thadou speaking people through Thadou village chiefs, church leaders. The holy bible was also distributed on the occasion to all the delegates, dignitaries, pioneer families, church leaders, women leaders, youth leaders, CVO leaders and others by executive secretary of TBA, Rev L Kipgen.