The departmental vehicles were handed over the ADCs during a distribution ceremony held in front of the chief minister’s secretariat, Babupara, Imphal. 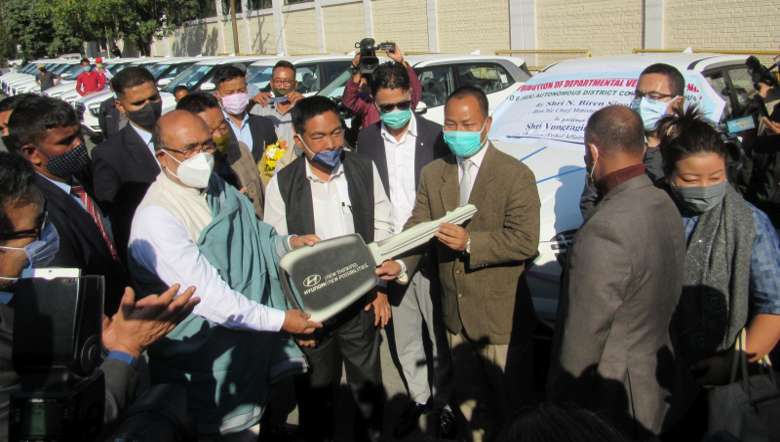 The departmental vehicles were handed over the ADCs during a distribution ceremony held in front of the chief minister’s secretariat, Babupara, Imphal.

Biren said the distribution of 18 vehicles to ADCs is to strengthen democracy starting from grass root level and is conducted under the BJP-led government’s ‘Go to hills’ mission. The government had also distributed some vehicles to the concerned district superintendent of police, including hill districts, he added.

Responding to media, Biren said, due to the present situation of COVID-19 and for the safety of people, elections of ADC is being delayed. As medical experts had announced that COVID-19 vaccine will be launched in the next few days, elections for ADC will also be scheduled timely. He further said the government is trying to solve the issue of university of culture and will be solved soon.

A press note issued in connection with the distribution ceremony mentioned that after the revival of six ADCs of Manipur namely, Chandel, Churachandpur, Kangpokpi, Senapati, Tamenglong and Ukhrul, the department of tribal affairs and hills has been incurring huge revenue expenditure on hiring of vehicles for 48 functionaries of ADC.

The department has been spending Rs 250 lakh to Rs 300 lakh in a year to clear this liability. The department of hills explored the possibility and feasibility of procurement of vehicles and the matter was discussed in the work advisory board (work programme board) of the department which consists of ministers, MLAs and representatives of the state finance department.

The board approved to purchase vehicles phase by phase which is more economical in all aspects and will convert huge recurring revenue expenditure into one-time expenditure. The proposal for purchase was placed before the economy board under the chairmanship of chief secretary and gave clearance to purchase departmental vehicles for six ADCs.

It is also mentioned that in 2018-19, the department purchased 12 Boleros, two each for six ADCs through government e-marketing place (GeM) and distributed to six ADCs. In 2020-21, 18 Hyundai Creta was purchased through GeM for distribution to six ADCs (3each).