On December 3, MUSU had warned of an agitation from December 5 if the Union Education Ministry fails to appoint a vice-chancellor in-charge of the university or make any other necessary arrangement by December 4. 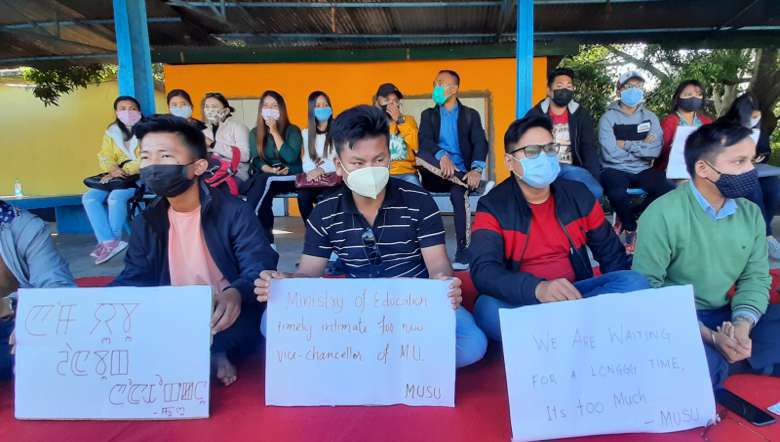 On December 3, MUSU had warned of agitation from December 5 if the Union Education Ministry fails to appoint a vice-chancellor in-charge of the university or make any other necessary arrangement by December 4. The union is yet to decide whether the agitation will continue.

Speaking to the Imphal Free Press during the protest, MUSU president Moirangthem Bobby said that there are lapses in the administration of the university and students are facing grievances since there is no regular VC of the university for about two-and-half years.

Boby said that MUSU had been waiting for a response from the Education Ministry after the administrator of the university Jarnail Singh was relieved from the post of administrator on November 30.

The MUSU president said, “If the prevailing situation of Manipur university had happened in other states of mainland India, it would have been a national issue”.

According to the Manipur University Act 2005, statute 2 clause 6, seniormost professor of the university should take charge as the vice-chancellor if the post is vacant. However, there is no order from the Union Education Ministry till date, he added.

It is learnt that the ministry has sent a letter to the registrar of Manipur University on December 4, stating that the proposal for assigning the change of the office of the vice-chancellor is under process.

The letter added, "The appropriate orders for assigning the charge of the office of vice-chancellor under relevant provisions of the Act and Statute of the concerned authority, are issued after approval of the competent authority and the university may wait for further communications in this regard".

It may be mentioned here that the post of the vice-chancellor remained vacant after the termination of former VC Professor Adya Prasad Pandey.

Pandey, who was appointed as Vice-Chancellor of Manipur University on October 26, 2016, was placed under suspension in 2018 after violent protests erupted on campus, which led to the prolonged shutdown of the university.

ALSO READ: MUSU to launch agitation if VC in-charge of MU is not appointed by Dec 4