Several pigs were found dead in Churachandpur district in the past week, but Veterinary officials feigned ignorance, writes Alex Guite. 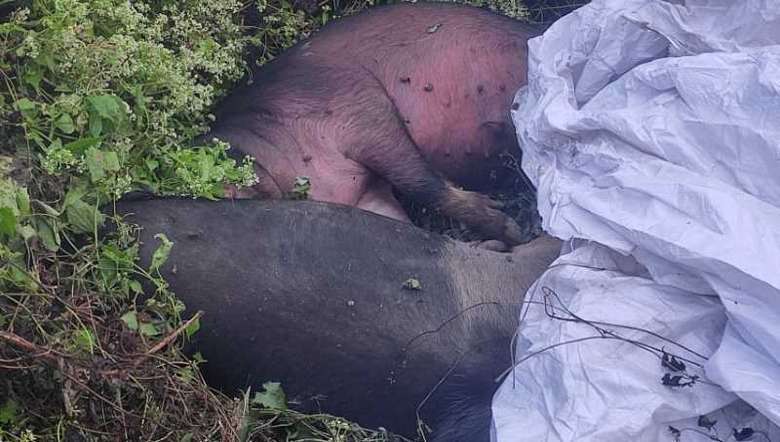 The mysterious death of several pigs in Churachandpur district of Manipur in the past week has sparked off swine flu scare among the residents and they are now reluctant to buy or consume pork meat.

On November 20, the Imphal Free Press had highlighted the spread of Classical Swine flu in several districts of the state. The report had quoted the state Veterinary and Animal Husbandry department as saying to IFP that the epidemic started in October at Kakching, Thoubal, Imphal East, Imphal West and Chandel districts. Due to the outbreak of the disease, many piggery farmers in the state fear it may affect their business and livelihood. So they appealed to the government to take up preventive measures to stop further spreading of the disease at the earliest.

However, amid no visible sign of action taken by the authority concerned, the disease seems to be spreading to other places. Till Wednesday, carcasses of pigs were found dumped at two locations namely, Lanva Lui and Mata Mualtam in Churachandpur town.

On being approached by the Imphal Free Presscorrespondent, the district Veterinary department expressed ignorance, saying, "No one approached them about the matter. They simply expressed their concern on the issue".

When asked further, the officials aired the problems they face and said the department has only nine staff and they cannot possibly reach each and every place. In view of the lack of staff, they urged the public to approach them regarding these issues.

Veterinary doctor Soma, speaking to the Imphal Free Press, expressed concern that carcasses of pigs are dumped in the open in the town area. "If other animals feed on them it may lead to many other health issues," she said.

It may be noted that in the wake of the festive time during the cold months, locals tend to consume more pork and other meat available in the market. Hence, the fear and the concern of several diseases spreading to people increases.

Urging the people to approach them if their animals are sick as it could be swine flu, Dr Soma mentioned that they have at least "1,000 vaccines in stock".

Meanwhile, one piggery owner Thangkhokhai Haokip from Bijang, who reared 10 pigs, lost four of them due to a mysterious sickness last week. He told the Imphal Free Press he buried the dead ones and is now administering swine flu vaccines to the remaining pigs.

Many like Haokip has taken to piggery farming as a means of livelihood in view of the high demand for pork meat. Hence, there’s a need to spread awareness among the piggery owners.

"One should not take risks as administering vaccines after the animals become infected will not be of any help but will aggravate the condition," he said.

In the wake of the serious human health and animal care concern, the veterinary department said they have distributed vaccines to households.

However, the department faces a major challenge as the majority of the public do not get their animals vaccinated.

"A major challenge is that the people generally do not vaccinate their animals unless a large-scale infection of epidemic proportion strikes," Dr Soma said.

"The animals are to be vaccinated every six months as there are seasonal infections like swine flu in pigs," she added.

Dr Soma appealed to the people not to dispose of their dead animals or carcasses for their own conveniences but bury them so that it does not pose a problem to others.

Meanwhile, there is also a report of the death of pigs at Mission Veng where a pig with seven piglets died mysteriously last week, two days after the mother gave birth.