During this COVID-19 pandemic, no one could afford to buy water due to lack of income. 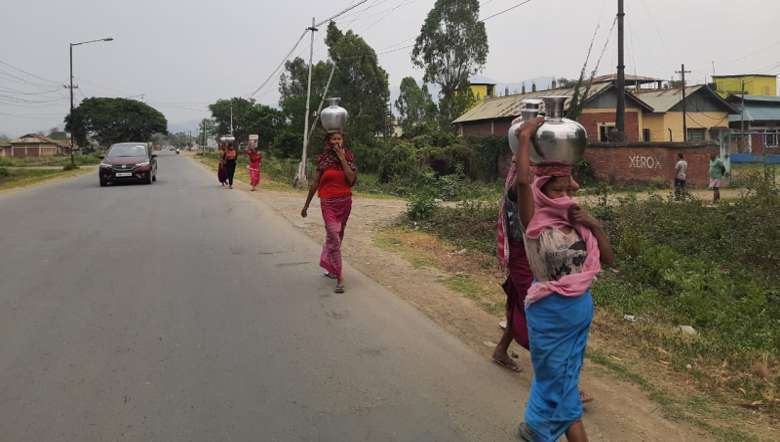 In a state, where tap water remains a pipedream for thousands of households in all its districts, womenfolk struggle to fetch drinking water as climate change impacts natural sources of water.

Majority of households in Manipur continue to depend on natural water sources for drinking and other domestic purposes. In most parts of the state, water for domestic use and for irrigation of farms is the key concern. In the face of non-availability of tap water and decreasing water sources, the burden of collecting water falls on women.

The situation worsens during the cold winter months. Water levels in most of the rivers and other sources of water during the dry season remain low. But like many other women in Manipur, one Tongbram Sanjukta has to fetch water every early morning and water her one acre of farmland on the banks of the Iril River in Imphal East district.

Sanjukta, as told to the Imphal Free Press, struggles for water and to ensure her family of five members has enough food to eat during the dry season, which begins in November. From November to February, she plants crops to earn some money to feed her family. To water the plants and irrigate the field, she fetches water from Iril river, as she could not afford to purchase water from the tank water supplier. Most households in all parts of the state purchase water from tank water supplier. Not many know whether the water is potable. They have no option but to purchase the supply water in the absence of tap water.

Sanjukta says she spent at least Rs 200 twice in a month to buy 1000 litres of water. Annually, her water budget has risen to 4,800 to 5000. “This is a huge amount for a poor family like us. I cannot afford more for buying that is why I fetch water from the river,” she said.

Women like Sanjukta play a major role in fetching water from rivers or ponds for drinking as well as domestic purposes. These women bear the brunt of climate change, where erratic rainfall, unusual floods and an increase in temperature are making daily life difficult.

Another woman Laishram (O) Ebethoi Devi, who digs soils for crop plantation at Iril river bank, told IFP that “it is the normal duty for women and girls in the community to fetch water from the nearby river or ponds. Womenfolk would wake up early morning and go to fetch at around 6 am to 7 am. They go to fetch water for drinking and other domestic purposes”.

During this COVID-19 pandemic, no one could afford to buy water due to lack of income. So most people fetch water from the river, she added.

In mid-September, as told to IFP, a small group of women who are working under the MGNREG scheme gathered at Sanjukta’s home with a team from a local club to talk about their experience on changes of natural water flow and waste deposited on river banks. Sanjukta lives in Naharup, Imphal East district. Following the meeting, women of the area are now taking the responsibility of banning waste disposal in the river bank. There are many Iril river bank areas that have huge wastes deposited.

Although heavy wastes are deposited in the Iril river banks and the wastes eventually find their way into the river, thousands of people depend on the river water.

People who live near the river do not get water supply from the reservoir. Steps have been taken up by the PHED department to tackle the task of drinking water supply by installing pipelines in many village areas of Imphal East.

“Now the lean season has started, the river water volume will decrease and the water flow will narrow. It is hard to fetch water when river water flows thin and narrow. When some parts of the river dry up, people will start buying water from the water supply,” said one Angom Sanatombi, who runs a shop at Naharup Thongkhong.

Apart from the problem of water scarcity and fetching water from rivers and ponds, the women have also seen more frequent rise in the level of water over the decade during the rainy season. Floods situation poses a more major problem during the rainy months.

The summer months are increasingly hot, said the womenfolk living near the Iril river banks.

Every year, Manipur faces an acute shortage of water particularly during the lean season even though it falls under high-intensity rainfall areas. All the riverine systems of the state originate from the hills and their flow depend on the annual monsoon. Heavy siltation also disturbs the water flow of the rivers due to deforestation in the hills. Such a problem is further aggravated due to climate variability resulting in the shortage of water supply every year.

The water scenario started to worsen as the rivers, which is the only source of water in the government water supply facilities, dried up amid the changing climate. Above this, the water requirement is increasing due to the expanding population, adding to the problem of water scarcity.

Generally, in Manipur, drinking water sources are away from the household premises and only 16  per cent of the households has within their premises. Hence, the burden of women for fetching drinking water rises with the change in climate, the 2011 Census report added.

It has been reported that among the hydrologic variables, precipitation and temperature are the most important climate variables which affect the water resources of the region. The temperature and rainfall patterns of the state will have a significant impact on water sources.

According to the directorate of environment and climate change, the government of Manipur, the average temperature of the state differs from place to place depending on the topography and altitude of the region. The fluctuation in rainfall patterns leads to flood and occasional drought in the state.

The directorate also stated that precipitation level has increased for most of the year with increasing intensity but with a gradual decline in the number of rainy days. There has also been an increase in the pre-monsoon rain over the last few years. The trend in the shifting of the period of rainy days in Manipur from monsoon months to pre-monsoon months after the decadal assessment of the monthly precipitation has been reported in the Manipur State Action Plan on Climate Change, 2013 published by the directorate of environment and climate change, the government of Manipur.

Many scientists also confirm the case of a water crisis in the next few decades. But this does not mean that there is no solution for solving the water crisis. Like local level planning processes for improving the rainwater harvesting techniques and recharge of groundwater can be taken up in each and every locality.

Ensuring forest rights, minimum wages under MGNREGA, tribal self-governance under the PESA Act and the implementation of pro-poor Acts and policies can prepare local development plans in order to tackle the problems of water crisis both in the valley and hills, environmentalists say.

The demand for water is increasing with the lifestyle changes brought about by modernization and urbanization, while the current climate variability is altering the existing water resources to a great extent. Water use efficiency should be increased by optimizing the water use with the help of different government agencies to provide water for various purposes, environmentalists suggest.