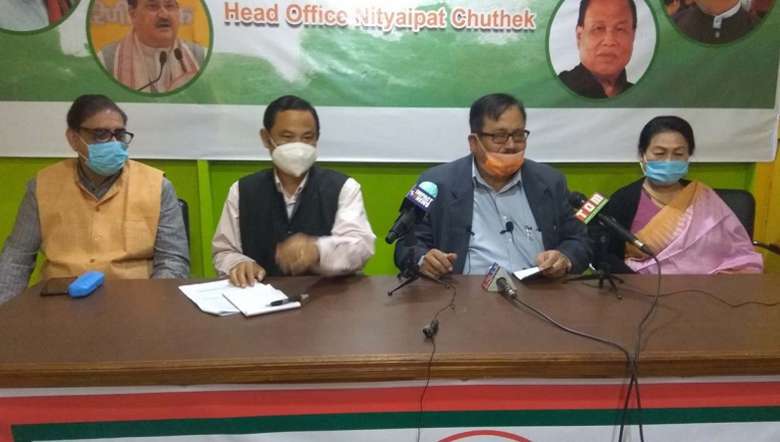 Manipur BJP spokesperson Ch Bijoy on Sunday alleged that it is in the bloodstream of the Congress party members to build up destructive ideas and mislead people against the nationwide development brought by BJP government,

Bijoy was speaking to the media in a press conference held at its party head office located at Nityaipat Chuthek, Imphal on Sunday.

Why are the Congress party members against the award given for the state, are they not the people of the state? Bijoy questioned.

Pointing out an example, Bijoy said that Rahul Gandhi had expressed earlier that if China defeats India, Narendra Modi will be defeated. The Congress party should be aware that they are also a part of India, he added.

The state never requested the India Today group for an award but it was awarded after analysing the development brought by CM N Biren, he added.

He further said that the initiatives taken by the present state government on ‘Go to Hills’ and ‘Go to Village’ have shown much clearer impact on the recent by-poll as out of the five vacant seats, BJP won four seats.

Responding to the allegation made by the state Congress party regarding the law and order, Bijoy said that in the last three and half years, several arrests have been made by the state authority concerned in connection with the illegal activities.

Moreover, the sufferings of the people of the state have almost ended in terms of petroleum products unlike during the time of the Congress government, he added.

He appealed to the state Congress party members to stop creating negative thoughts among the public and rather support the development brought by the present chief minister as they are also a part of the state and the country as a whole.