Damdei FC lifted the champion trophy with a cash prize of Rs. 1 lakh and a medal each. 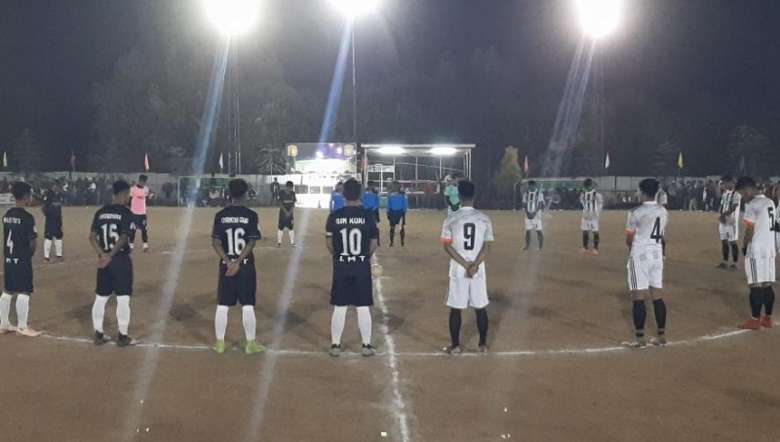 The Kuki Football Academy Open Night Football Tournament, which is one of the various prestigious football tournaments in Manipur, ended on Saturday night at KFA playground at D Phaihel village in Kangpokpi district, with the crowd and players paying condolence over the demise of Diego Maradona.

Acknowledging the importance of sports, Dikho said that God has given the people beautiful land and made them live in this beautiful world happily. However, the people have created a lot of social issues and conflicts against the will of God. Sports is one of the means to restore and enjoy what God created in this world, he said.

He continued that sports can bring development, peace and harmony and it can also bring better understanding and so many other things. He exhorted the Kuki Football Academy to be an ambassador of constructive sports in restoring society from various social issues and conflicts.

The minister also gave assurance to the verbal memorandum of the Kuki Football Academy for providing a common mega water supply for the academy and to more than 45 villages in the area he will personally visit along with the officials concerned before Christmas. He also contributed Rs 1 lakh in cash to the organising committee apart from the contributions from other dignitaries.

Dikho accompanied by other dignitaries inspected the players of Damdei FC and Lalcha Memorial Team, the two finalist teams. He also kicked in a ball as a mark of opening the final match.

Earlier, before the commencement of the final match, all the players and crowds under the aegis of the organising committee, the Kuki Football Academy observed a minute silence as a mark of condolence over the demise of legendary footballer Diego Maradona.

The first half of the final match went in favour of Lalcha Memorial Team when Ginkholen Kuki did a banana strike from 20 yards indirect kick in the 36th minute.

However, Damdei FC found a late equaliser in the last minute of the second half through a brilliant strike from Gousem Chongloi, compelling the winner to be decided via tie break.

All the referee boards were also honoured with a presentation and reward.