The Saramba Segment Voice appealed to the concerned department to re-route the old North Eastern Council (NEC) road and to pass through Achintiang Point. 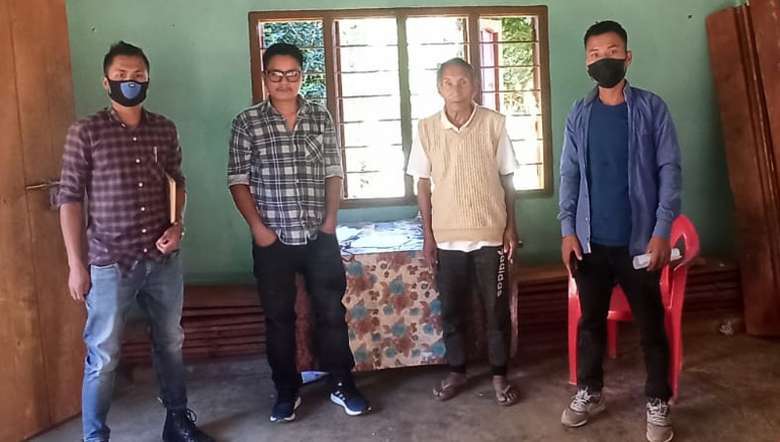 SSV leaders with R Rajanglung, a member of the District Planning Board, who had proposed the construction of Tamenglong-Haflong road

The Saramba Segment Voice (SSV) has reiterated its stance against the construction of the Tamenglong-Haflong highway with a new alignment and demanded that highway be constructed as per the ‘Gupta Alignment’ which has already been agreed upon since the initiation of the project.

Opposing the intervention of the district administration to construct the highway with a new alignment, SSV president Loveson Kamei told the Imphal Free Press that the proposed new alignment is against the will of the people residing at the area, particularly the people of Saramba Segment.

"The people of Saramba Segment want the Tamenglong-Haflong highway to be constructed and pass through Achintiang, the lowest gradient point, as under the Gupta alignment which is the most feasible alignment. This will benefit larger section of the villages living in the area," Kamei said.

The SSV president further said, "The last minute intervention made by the present Deputy Commissioner to divert the highway nearer towards the Zeme and Liangmai villages, ignoring or leaving behind the larger Rongmei villages is uncalled for."

We appeal to the concerned department to re-route the old North Eastern Council (NEC) road and to pass through Achintiang Point that will connect to the Tamenglong Barak bridge point and Makru river bridge via Tousem Sub-Division headquarters, Kamei told IFP.

Kamei asserted that the construction of the Tamenglong-Tousem-Haflong road was implemented according to the District Planning Development Board in collaboration with PWD, Manipur and NEC during the tenure of former Manipur chief minister Rishang Keishing (1972-1973). A team of technician, comprising Tomba Roy executive engineer, PWD, Tamenglong division, Sakum, SO and Gupta, SO, PWD had surveyed and found the alignment technically feasible. Moreover, an evaluation team from WAPCOS had evaluated and reported that the alignment was technically feasible, except that some minor culvert, bridges and rocky have to be renovated, added Kamei.

These details were shared with SSV during a meeting held with R Rajanglung, a member of the District Planning Board, who had proposed the construction of Tamenglong-Haflong road in 1972, Kamei said.

Given this fact, Kamei held that it will also be unwise to not continue with the existing alignment. Also, the Government of India has spent crore of rupees for the welfare of the people. Constructing the highway with a new alignment will be a waste of time, effort and money, he said.