The students of Government Dance College, Music College and JN Dance Academy carried out a peaceful protest on Friday to meet the vice-chancellor of the university to place their demands. 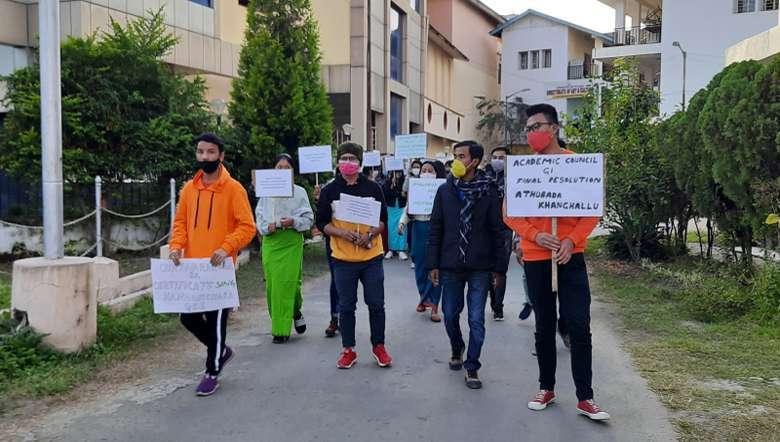 Denouncing the criteria and eligibility for MA Music and MA Dance in Manipur University of Culture (MUC), students of different colleges protested at the university in Imphal, holding placards on Friday.

The students of Government Dance College, Music College and JN Dance Academy carried out the peaceful protest to meet the vice-chancellor of the university to place their demands.

Informing that the eligibility for master programme in MUC requires a graduate from a UGC recognised institute, Saknaibai also said that Government Dance College, Music College and JN Dance Academy are only recognised by the state government but not by UGC. She further said that many students who completed their courses from the said colleges have got admission in other states and Manipur University but not in MUC.  How the MUC has set separate criteria which sideline the students of the three colleges, she questioned.

Later, the students ended the protest after the deputy registrar of MUC instructed them to submit their demands in a written format.

Earlier this month, Kanglei Indigenous Martial Arts and Cultural Society (KIMACS) had appealed to the academic council of MUC to consider for the students who will waste many years studying again for a recognised institute and their future. Secretary of KIMACS, Laishram Sanjit had also alleged that there are many teachers in MUC who had passed out from the institutes which are not recognised by UGC.

On the other hand, MUC Students Union on Nov 20, alleged that some students in support of some organisations were trying to get admission in MA of the university by disregarding the UGC norms.