The need of the hour is working out a sustainable means of livelihood for the poppy farmers. 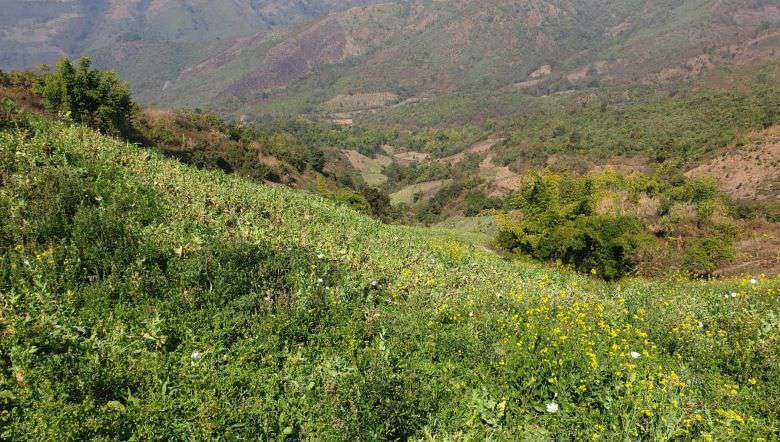 Off and on, the Chief Minister had been asking villagers to choose alternative means of livelihood like plantation of palm trees, lemongrass and other horticulture items or mithun rearing instead of poppy plantation in hill areas of Manipur as a part of the "War of Drugs” launched in November 2018 by the state government. We would rather prefer “Campaign against Drugs” instead of using the word “War” as the campaign needs to take into consideration the rehabilitation of drug addicts and also a support structure for shifting to alternative crops instead of poppy. Surprisingly, some elements tried to add a communal tinge to the campaign against poppy plantation in social media, recently. This has led to police department filing two FIRs against the social media posts.

Also, the department has announced that it will intensify destroying of poppy plants as ground survey and satellite imageries of poppy plantation area have already been completed.

However, the state has witnessed a rise in the plantation of poppy since the last few years. The state DGP even conducted an interaction programme with about 100 village chiefs regarding Narcotics Drugs and Psychotropic Substances (NDPS) Act, 1985 and alternative crops to be planted suitably in hilly areas. Earlier, poppy plantation in Manipur hills was mainly in the regions bordering Myanmar.

Somehow, poppy plantation became widespread in the hills and it began to be treated as some sort of ‘cash crop’ yielding easy money. Now, the need of the hour is working out a sustainable means of livelihood for these poppy farmers. A multi-disciplinary approach to the problem is required to deal with it instead of knee-jerk reactions. The Chief Minister has floated the ideas of palm trees, lemongrass and other horticulture items or mithun rearing as alternatives. Now, it is the turn of experts to move in. As we already have Manipur State Livelihood Mission in the state, it should be asked to come up with a coordinated effort to churn out effective alternative means of livelihood for the poppy farmers. We had earlier talked about invigorating the Horticulture Mission in the state.

We would like to throw in the idea of tea plantation as an alternative, even though a state-sponsored tea plantation in Jiribam had gone to waste. The failure was however of poor management.

Although the place of origin of tea plant is still a matter of speculation, Manipur is also one of the many places. For many years, controversies raged among scientists and scholars as to whether the tea plant originated in China or in India. Indigenous Assam tea was discovered in 1823. Since the early part of 19th century, the discovery of ‘wild’ tea plants in Assam, Manipur, Mizoram, Myanmar, Thailand and up to South Vietnam and Laos indicates that this part is the original habitat of tea plants. The tea tracts where the so-called “wild” tea was discovered were almost certainly clumps of cultivated tea abandoned by the migratory hill tribes.

Tea requires a moderately hot and humid climate. Climate influences yield, crop distribution and quality. Therefore, before cultivating tea in a new area, the suitability of the climate is the first point to be considered. Tea grows best on well-drained fertile acid soil on high lands. Tea plantations require even distribution of water without any waterlogging. Hill slopes provide proper drainage and prevent waterlogging problems. This is the reason why tea plantations are usually grown on hill slopes. Attempts to expand tea in non-traditional areas have not been met with much success since large plantations do not seem to be interested in increasing their area. Under such a situation, promoting small scale tea cultivation appears to be the most practical business proposition in the potential areas. However, the small scale tea sector faces a number of problems like lack of capital, improper knowledge and techniques of tea cultivation, and the problem of marketing. A new type of production organisation and ownership structure may be promoted to look after the multi-pronged problems of production, marketing and supporting services for the smallholder tea production.