On World Fisheries Day Sunday, awards for best performing states in the Fisheries Sector were given for the first time to promote healthy competition among states. 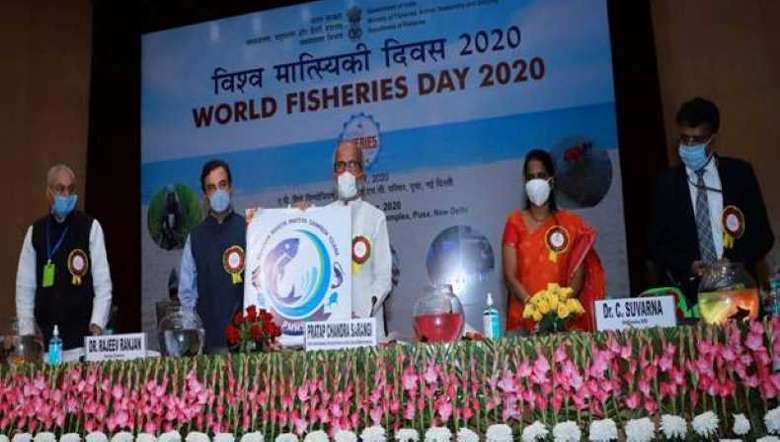 Uttar Pradesh was awarded the best-performing state in the inland fisheries sector. The award for UP was received by Laxmi Narayan Chaudhary, Minister for Dairy Development, Animal Husbandry and Fisheries, Government of Uttar Pradesh at the event held at the NASC Complex, Pusa, New Delhi.

Minister of State for Fisheries, Animal Husbandry and Dairying, Pratap Chandra Sarangi, speaking as Chief Guest at the occasion, said, “World Fisheries Day is our way of thinking globally and acting locally as we reach out to our fisher communities through local events”.

The fishers, fish farmers, entrepreneurs, stakeholders, professionals, officials and Scientist from across the nation participated in the event.

“Through this event, we send a message to our fishers, to our nation and to the world that fisheries are an important sector that contributes immensely to the socio-economic growth of the country,” Sarangi said in a release by the Union Ministry of Fisheries, Animal Husbandry and Dairying.

The minister also said that this sector is responsible for providing nutritional security, livelihood support and employment to millions of Indians.

“It is estimated that the world’s population will exceed 9 billion by 2050. With the increase in the population, the demand for nutritional security also goes on parallel lines. The agriculture and the allied sectors have to contribute the food demand and supply will play an important role combined with other food sectors to meet the nutritional demands of the growing population,” he said.

Sarangi pointed out that the marine capture fisheries of our country have become stagnant and there is a paradigm shift from capture to culture-based fisheries. “Aquaculture activities have to be taken up in India as the alternative way of meeting the growing demand for nutritional security,” he said.

There is a need to streamline policies and programmes to take R&D benefits to the farmers and fishers for orderly and sustainable utilisation of all potential resources with a focus on increasing efficiency and reducing environmental footprint, Sarangi emphasised.

The minister appealed to all the dignitaries present at the occasion to provide as much support as possible for the development of the fish sector, to increase fish production and in turn improve the socio-economic conditions of the fishermen and other people associated in this sector.

“Let us celebrate this ‘World Fisheries Day’ to highlight and protect the lives and livelihoods of fishing communities, sustainable fish stocks and healthy ecosystems in India,” he said.

The government also felicitated the best Fisheries Enterprise; best performing Fisheries Cooperative Societies/FFPOs/SSG and best Individual entrepreneurs; best Marine and Inland Fish Farmer; and best Finfish and Shrimp hatcheries as well, in recognition to their accomplishments in the field and their contribution into the growth of the sector. Prizes were distributed to all the awardees and several publications were also released during the event,