Inspector General of Police (intelligence) and NAB, K Radhashyam said that Manipur being near to the golden triangle, the society has been hugely affected by drugs. To fight against the drug menace, the present government declared ‘war on drugs’ on November 3, 2018. 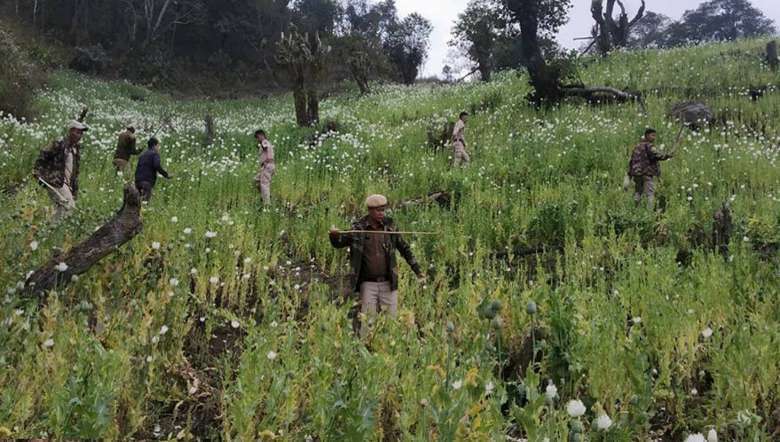 As a part of the Manipur government’s ‘war on drugs’, state police department will intensify destroying of poppy plants and ground survey and taking satellite imageries of poppy plantation area has been completed, said Inspector General of Police (intelligence) and NAB K Radhashyam.

He was speaking to the media Saturday evening in a press conference held at his office chamber located at Babupara in Imphal.

He said Manipur being near to the golden triangle, the society has been hugely affected by drugs. To fight against the drug menace, the present government declared ‘war on drugs’ on November 3, 2018.

As per narcotic police, the period from the month of September to next year’s March is termed as a ‘crop year’.

The IGP said before entering the next crop year 2020-21, under the leadership of director general of police interaction programme has been conducted with about 100 village chiefs regarding the Narcotics Drugs and Psychotropic Substances (ND & PS) Act, 1985 and alternative crops to be planted suitably in hilly areas.

The IGP pointed out that under ND & PS Act, any person violating the act and even the land owners whose lands are used in poppy plantation is punishable.

Further saying that poppy plants were destroyed at Lanva hill range in Churachandpur district on Friday, he said that about 20 acres of poppy were destroyed during the operation.

“It is unfortunate that some individuals have uploaded comments in social media with the intention to give communal touch among the people,” he said and urged the people to support the operation to root out drug menace from Manipur.

In October, chief minister announced that a massive operation against poppy plantations would begin from the first week of November. He said, for the said purpose as many as 100 police personnel would be specifically deployed in every district. The police personnel would be stationed at the poppy cultivation sites until all the poppy plants are fully uprooted and destroyed, said Biren.