In all, 148 people were tested for COVID-19 as a part of the sero-surveillance on Saturday 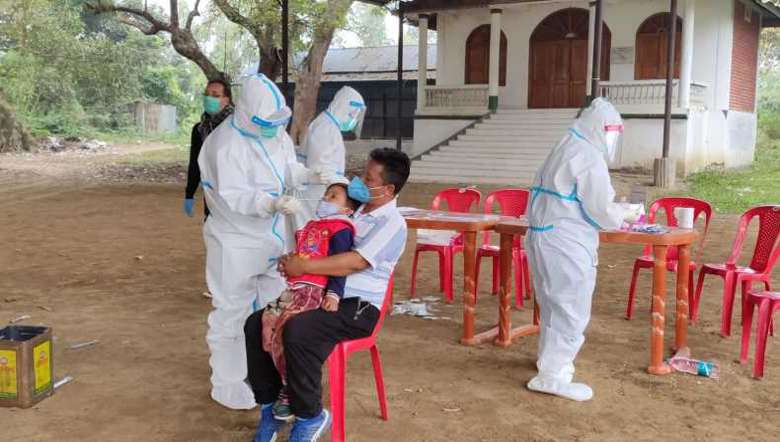 Of the 56 people tested today in Lilong, 15 were tested positive for the disease. Sero-surveillance has been undertaken by the state government to contain the possible spread of coronavirus infection during the by-election which was held recently.

In Wangjing Tentha assembly constituency, the surveillance was carried out by two medical teams of Thoubal district by conducting rapid antigen tests at Wangjing community hall and Sapam community hall. Local MLA Paonam Brojen visited the sites to inspect the situation. The number of tests conducted was low as very few people from Wangjing Lamding Municipal area and Sapam Chingtham GP area came out to take the tests.

With the target to test 500 people daily, the surveillance began at 11 am at Wangjing Municipal area. 73 people took the tests and all of them tested negative. At Sapam Chingtham GP area, tests were conducted on 75 people, of which eight were tested positive.

MLA Paonam Brojen, who inspected the surveillance, urged the public to come out and take the tests and help fight the pandemic which has ravaged humanity across the world.

“If anyone is tested positive, proper attention and care will be given by allowing them home isolation under the supervision of CMO,” he said. The public must take this opportunity provided by the state government to take the tests for infection and help prevent further spread of the disease, he added.

The surveillance beginning today at Wangjing-Tentha will continue for five days and all should not miss the opportunity, the MLA said further appealing the clubs and organisations to extend their assistance.

Informing that home isolation can be safe and effective by following the rules, MLA Brojen continued that the pandemic can be easily defeated if people cooperate. “Therefore, one should not panic if the result comes positive as they can be effectively treated by taking the medicines and vitamins, and following the advice of the doctors. As a matter of fact, the recovery rate is high and the public should not be afraid of taking the test,” he said.

On November 23, the surveillance will continue at Tekcham High School for Tekcham GP area and the same will be held at Wangjing Hodamba community Hall for Wangjing GP Area.

On November 25, the surveillance will be held at Lalit Madhop High School for Khongjom and Langthabal area. For Wangjing SK Leikai and Wangjing Khabukhong area, the test will be held at Wangjing Community hall.

Meanwhile, the surveillance continued for the second day in Lilong assembly constituency. Tests were carried out for Lilong Nungei, Chongtham, Nungei Nalla and Lilong Dam Makha at Nungei Aided UJB School. 32 people were tested of which 15 were tested positive.