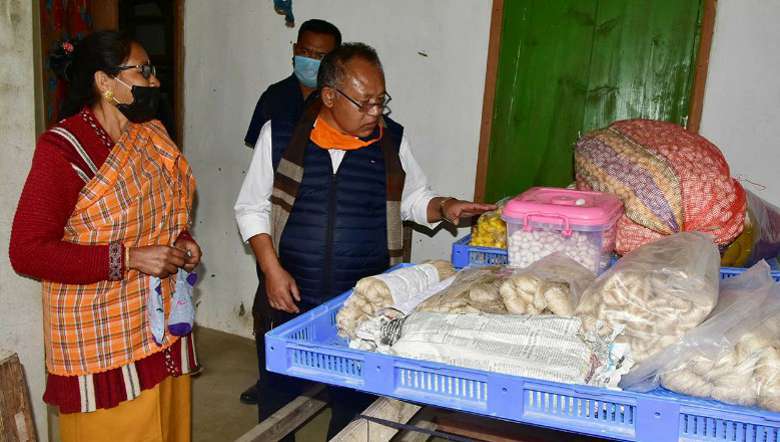 Continuing his field visit of inspecting the progress of Seri farms in the state, minister Awangbow Newmai has announced that extra support will be provided to hardworking seri-farmers and penalty to insincere beneficiaries.

Speaking to media persons, minister Newmai said that he was satisfied to see the hard work of the Seri beneficiaries (farmers).

He said that to help people earn their own income, under the Integrated Sericulture Project (ISDP) the beneficiaries are provided assistance for construction of silkworm rearing house to produce cocoons, rearing appliances, planting materials which includes training facilities in the field of silkworm rearing and silkworm food plantation that is mulberry.

He said that the silk threads (raw silk material) made from the cocoons are then sold to the weavers or to the Directorate of Sericulture.

He further said that if each and every beneficiary under the Seri and other departments work hard to earn their own income then the problem of the unemployment will be solved to some extent. If suitable schemes are implemented under the various departments for the farmers per their interest and area suitability, farmers can gain more profit, he added.

He said that the Seri officials have already identified fraudulent beneficiaries and the process to punish them with a befitting penalty will be initiated soon by the Directorate. He said hard-working beneficiaries will be further encouraged by the Sericulture Directorate by giving them the required additional help. He said that he was impressed to see the Seri beneficiaries of Moirang Khunou working in a cluster under the supervision of the Thanga MLA and added that they have set an example for the people of the State.

T. Robindro, MLA Thanga AC said that 30 Seri beneficiaries in a cluster have planted 70,000 saplings of mulberry plants in Moirang Khunou polling C area. Most of the beneficiaries’ do not own agricultural land and were earlier working in paddy fields owned by others. Many of them were rendered jobless as machines have overtaken work at paddy fields, he added.

Stating that ISDP under the Seri is an excellent option to earn a livelihood, he said that he is supervising the Seri beneficiaries for the successful continuation of the project. He said that he has approached the Directorate officials to help other farmers.