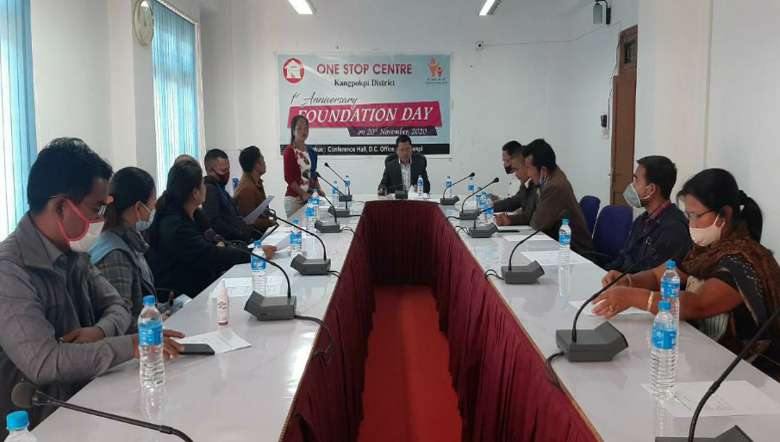 The central scheme of OSC under the directives of the Ministry of Women and Child Development was inaugurated on November 20, 2019 by the then Social Welfare and Cooperation Minister Nemcha Kipgen. The scheme was to provide integrated support and assistance to the women affected by violence, both in private and public spaces under one roof and to facilitate immediate access to the range of services including medical, legal, psychological and counselling support under one roof to fight against any forms of violence against women in the district.

The observance was attended by additional DC of Kangpokpi, Lalramsang Infimate as chief guest on behalf of the DC while the guest of honour, SP of Kangpokpi, PG Singsit had to skip the function owing to unavoidable official work but met the staff of OSC.

The dignitaries and participants also observed a minute silence as a mark of condolence to pay tribute to the departed soul of the central administrator of OSC, Helam Haokip, who recently expired.

Lalramsang Infimate emphasised on how to utilise the customary law when it comes to violence and crime against women which is highly important to streamline mainly among the tribal communities.

“We as a tribal have very important customary law and we are very much dependent on it in every issue but sometimes the customary law becomes a bottleneck in delivering justice when it comes to women issues especially in violence and crimes,” said Lalramsang.

He continued that the tribal communities have witnessed and experienced many problems which are not always solved through the custom and so OSC is one platform where people can all work together to bring justice to the society especially to the womenfolk.

The additional DC also called on innovative ideas and suggestions on the issues faced by the OSC, CWC and ChildLine of the districts while advocating collective efforts and struggles for all-round development, especially for safety, welfare and empowerment of the women in the district.

According to caseworker of OSC, Lhingneihoi Haokip, there are 12 cases including nine domestic violence, one rape case, one missing case and dowry case had been registered at OSC Kangpokpi from November 20, 2019, to November 20, 2020, and all the cases have been solved with no pending cases. She also said that OSC Kangpokpi had provided 15 psychosocial counselling, three legal counselling, four medical aids and five shelters apart from two police facilitation.

Lhingneihoi said that there are only two regular staff now at OSC Kangpokpi and owing to the shortage of staff, it has become very difficult in imparting awareness among the people. She also drew the attention of the authority concerned to look into the matter in solving the problems of shortage of staff and infrastructures and sought maximum cooperation and support from CWC, ChildLine and civil bodies.