'The entire Garo Hills is a herbal garden which abounds in medicinal plants and herbs, including rare species of plants'. 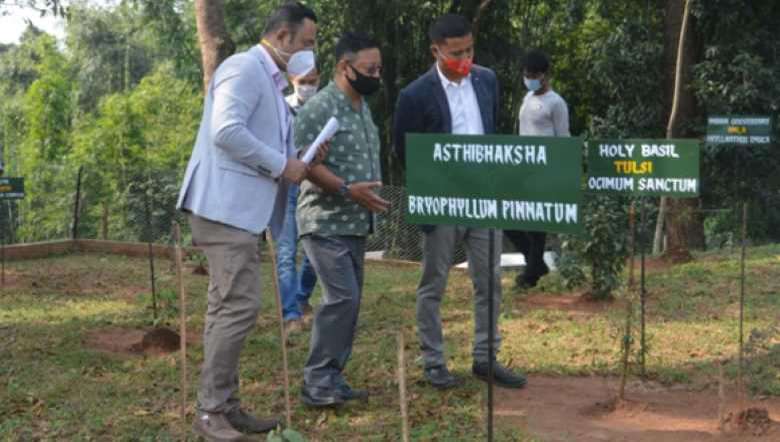 The first-ever Ayush Herbal Garden-cum-Ayush Gram in the entire Garo Hills region was inaugurated by the Adviser to the Chief Minister, Thomas A Sangma at Asananggre in West Garo Hills, as a part of the fifth National Ayurveda Day.

Emphasizing on the varied biodiversity, including medicinal plants and herbs available in the region on Thursday, Sangma said that the region is blessed in abundance with natural herbs and people should be sensitized to preserve these medicinal plants and herbs in order to promote its use to heal various health-related problems in the future. Reminding that the forefathers have been practising local herbal medicines through experience, he said that the traditional system of medicine should also be preserved.

Stating that this herbal garden is not for show but to tell people about the usefulness of these herbs which can cure various ailments, the CM adviser urged everyone to plant and preserve not only in these herbal gardens but in their homes also, so that the future generation can use them.

Sharing his personal experience, Sangma said that consuming Me’mang Narang (citrus indica) daily along with other local vegetables has helped him to stay fit and healthy and consuming these fruits and vegetables have helped to boost his immune system. He also encouraged the concerned authority to extend this herbal garden to schools, colleges and other districts which will benefit the people of the region.

“The entire Garo Hills is a herbal garden which abounds in medicinal plants and herbs, including rare species of plants,” said Deputy Commissioner Ram Singh and suggested that Ayush should do special research along with the central team to find out preventive measures and to protect this traditional knowledge and medicine in the interest of the people of the area and beyond.

Singh mentioned that the State Medicinal Plant Board has a special scheme for preserving rare and endangered species of plants for which Rs 25,000 as a one-time grant for school herbal garden and Rs 7,000 per annum for their maintenance and urged that every school should avail this opportunity.

The district Ayush nodal officer, Dr Lakshmi B. Sangma highlighted the importance and role of Ayush system of medicine which comprises Ayurveda, yoga and naturopathy,unani, siddhaand homoeopathy. Dr Sangma also informed about the need to create awareness to tap the potential of Ayurveda contribution towards the national health policy programme as well as to promote ayurvedic principles of healing in society. Further, she mentioned that among 8,000 herbs accepted by the Ayush, the most common herbs such as aloe vera, tulsi or basil, ginger, turmeric, etc are used by the people every day.

Tura Municipal Board chairman J D Sangma, District Social Welfare Officer Hemaritha Sangma, medical officers along with district officials and people of the area were present at the function.