Every sane person knew in the depth of their hearts that the SOPs would be followed more in violations than adherence. 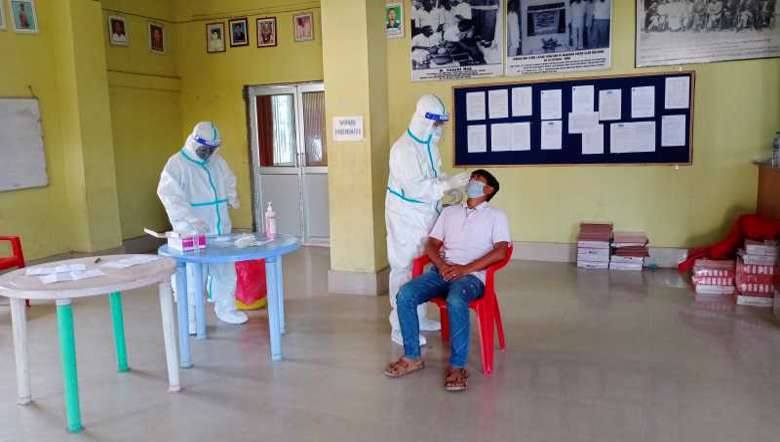 Finally, the cat is out of the bag. Of the 533 persons tested 95 were found COVID-19 positive in a special testing drive conducted in the Wangoi assembly constituency. The special drive was conducted in view of the widespread violation of Covid 19 SOPs in the recently held by-elections in five assembly constituencies as caused by a spate of resignations from the Congress party. We are lucky, actual voting did not happen in Singhat constituency of Churachandpur district as the BJP candidate Ginsuanhau was declared elected as his lone rival withdrew from the race. But, elections were held in the constituencies of Wangoi of Imphal West district, Wangjing Tentha and Lilong of Thoubal district and Saitu constituency of Kangpokpi district. Out of the four constituencies, BJP won in three while in Lilong an Independent was elected. Even as the general public expressed apprehension on the possibility of community transmission during the elections, the Election Commission of India had to exercise its constitutional mandate and conduct by-elections within six months whenever a vacancy occurs. And the Commission did issue broad guidelines and SOPs to be followed from campaign to voting and counting as well.

The Commission has laid down guidelines for door-to-door campaign, roadshows and election meetings. The guidelines said, door-to-door campaign shall be restricted to only a group of five persons including candidates, excluding security personnel. In roadshows, the convoy of vehicles should be broken after every five vehicles instead of 10 vehicles excluding the security vehicles. The interval between two sets of a convoy of vehicles should be half an hour instead of a gap of 100 meters.

Public gatherings and rallies may be conducted subject to adherence to extant COVID-19 guidelines. For this, the Commission has fixed the responsibility of ensuring the adherence to the District Election Officers. They have been instructed to identify dedicated grounds for public gathering with clearly marked entry and exit points, in advance and put markers to ensure social distancing norms by the attendees and the limit of attendees as prescribed by the State Disaster Management Authority for public gatherings. Also, the political parties and candidates concerned should ensure that all COVID-19 related requirement like face masks, sanitizers, thermal scanning etc. are fulfilled during each of these activities.

Well to be honest, nobody expected the guidelines and SOPs to be followed in letter and spirit by the concerned parties or candidates or for that matter the general public. Every sane person knew in the depth of their hearts that the SOPs would be followed more in violations than adherence. And it would be foolhardy to think that ECI did not expect this. As the newspapers reported the widespread violation of SOPs, the state health authorities jumped into action and conducted the special drive.

On Day One, the special drive was conducted in only eleven places under Wangoi constituency. There are still more areas to be covered in the drive and in other constituencies where by-elections were held. It may be noted here that the chief minister himself had admitted that there were violations in the recent by-elections, just before he was tested positive for Covid 19. Now the question is who we are going to blame for the violations?