While interacting with the farmers Awangbou told them that the state government is ready to extend help and work together with hard working farmers. 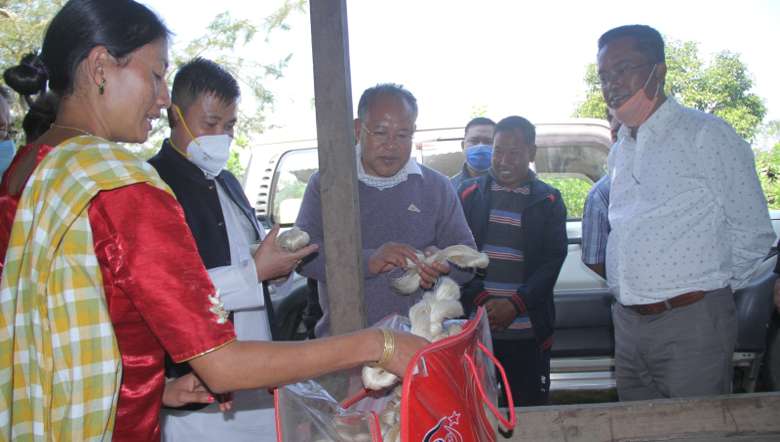 Manipur Minister of Sericulture Awangbou Newmai has appealed to Seri beneficiaries (farmers) to make good use of opportunities and benefits provided by the state government.

In continuation of his field visit to Seri farms in the State, Awangbou along with concerned district officials and officials of Sericulture department visited Seri farms at Sangaithel, Phayeng, Langdeibung Kangchup, Khurkhul Awang, Khurkhul Makha Leikai and Kanto Sabal in Imphal West on Thursday.

Briefing the media during the visit, Awangbou said, “it is encouraging to see the ground reality that the beneficiaries are trying their level best to yield an income out of it and make it as their profession.”

However, there are beneficiaries who have not been able to materialise/ implement sericulture successfully, he said and urged those non-performing farmers to make good use of the opportunities provided by the state government.

“There may be no immediate programmes or schemes to meet the demands of the farmers but the state government will try to extend help in any possible means,” the minister assured.

While interacting with the farmers Awangbou told them that the state government is ready to extend help and work together with hard working farmers.

Chairman of Manipur Building and Other Construction Workers Welfare Board Heikham Dingo, who was also a part of the visit, said that Awangbou may be the first minister who visited and interacted with the farmers personally.

Saying that Manipur is not economically sound compared to other states, Dingo stated that the Sericulture department can help in improving the economy of the people by extending maximum support to the farmers engaging in sericulture.

Sericulture department and other departments with resources potentials should be more active. Nevertheless, the farmers will be motivated as the minister has personally visited them, he added.