After the kingdom of Manipur was annexed by India on October 15, 1949, the then chief commissioner Himat Singh had abolished the Inner Line Permit System on November 18, 1950, Inner Line Permit (ILP) Observation Committee president H Ibotombi said. 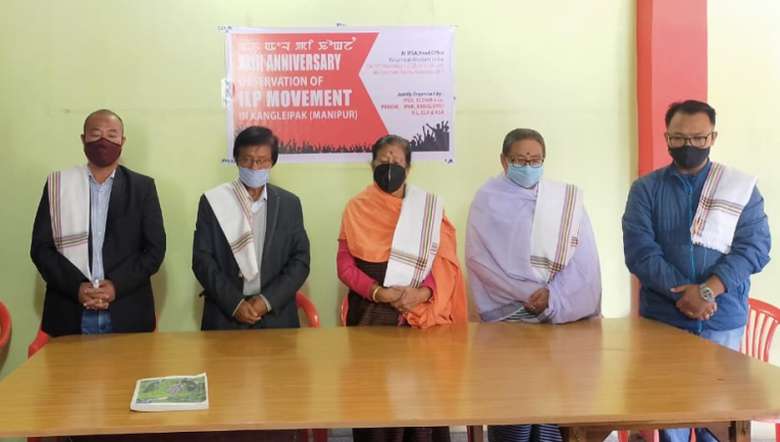 The Inner Line Permit (ILP) Observation Committee on Wednesday commemorated the 23rd anniversary of ILP movement in the state at IPSA office.

President of the committee H Ibotombi, in his keynote speech, said that the once independent Manipur with more than 2000 years of ancestral history had entry and exit and transit system of its own.

“After the kingdom of Manipur was annexed by India on October 15, 1949, the then chief commissioner Himat Singh had abolished the Inner Line Permit System on November 18, 1950. After the abolition of the permit system, influx of migrants from outside the state began under Article 19 (1) of the Indian Constitution. Even as India has Foreigners' Act, 1946, the act was not properly implemented in the state of Manipur,” he stated.

In 1979-1980, the students of Manipur and civil voluntary organisations started agitation to prohibit entry of migrants in the state. The then MLA Hidam Bidur on July 17, 1993 raised the issue of the influx of migrants in the state and thus is considered as the first initiative in the state assembly for protection of the indigenous people. However, the then chief minister RK Dorendro did not take the issue seriously and MLA Hidam Bidur was mocked by assembly members, he recounted.

He further said that in 1979-1980, people of the state launched anti-foreigner movement and later on November 18, 1997, sister organisation of IPSA started campaign for re-introduction of the ILPS. In 2006, the ILP demand joint committee was reformed and organised Residential Leaders Meet at Khuman Lampak Youth Hostel on July 6, 2006. Memberships were enrolled under joint convenor, Sapamcha Jadumani and Dilipkumar. Under joint convenor, different programmes and awareness were held at different districts. After a few years, the ILP issue was handed over to Federation of Regional Indigenous Society (FRIENDS). The issue had been taken as a unique programme by FRIENDS and gave pressure to the state government. Again, a memorandum was submitted to Prime Minister Narendra Modi to implement Bengal Eastern Frontier Regulation, 1873. Further, the issue was put up at Manipur Legislative Assembly and discussed the matter, he added.

Being a state issue, a Joint Committee on Inner Line Permit System (JCILPS) was again formed on July 4, 2012 at HERICOUN office. JCILPS was formed under six convenors and extended into women wing, student’s wing. When JCILPS completed one year, a general body meeting was held at Manipur Press Club on July, 4, 2013, Ibotombi said.

He also said that in Manipur Legislative Assembly, MLA I Ibohanbi moved the Bengal Eastern Frontier Regulation, 1873 to be implemented in Manipur. Further, on March 13, 2015, ex chief minister O Ibobi put up the Manipur Regulation of Visitors, Tenants and Migrants Workers Bill, 2015 and passed the bill. But the bill was not to protect indigenous people of the state. As such, the students had launched various agitations and on July 8, 2015 a student Sapam Robinhood was killed.

Further, former Chief Minister O Ibobi put up three bills on August 31, 2015 namely, The Protection of Manipur People’s Bill, 2015, the Manipur Land Revenue and Land Reforms (7th amendment) Bill, 2015, the Manipur Shops and Establishment (2nd amendment ) Bill, 2015. Assembly had tried to do a voice vote but nine tribal people died in agitations in Churachandpur over the bill being ‘anti-tribal’. India’s president cancelled the bills and were not approved.

The committee chairman continued that with the coming of the BJP-led coalition government, the CVOs of the state and Chief Minister N Biren discussed a bill, the Manipur People Act 2018 on July 20, 2018 and put up the bill on July 23, 2018 at assembly and the house passed the Manipur People Bill 2018. Governor had sent the bill for assent from the president. But suddenly, the Citizenship Amendment Bill was about to be passed at Parliament and on December 9, 2019 the union minister announced Manipur as ILP regime state at Parliament session. And India’s president notified in the gazette of India thereby implementing ILP in the state, he added.

After long years of agitation, ILP was implemented in the state and during the commemoration, JCILPS members praised the people of Manipur for long years support and taking part in agitations.