Yongchak trees in Manipur are slowly drying up 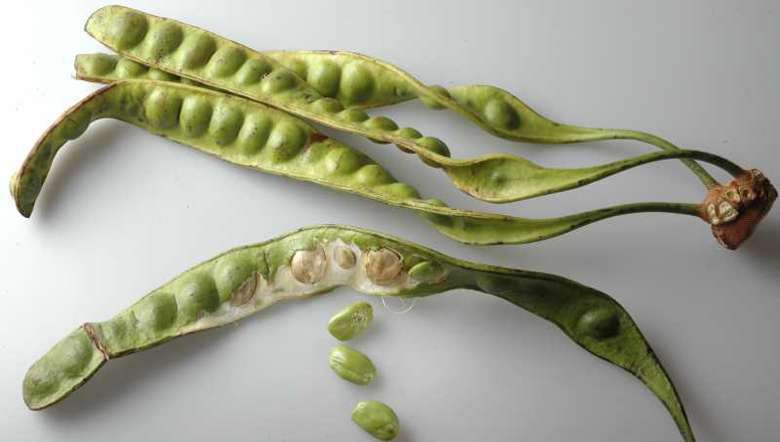 PARKIA SPECIOSA (the bitter bean, twisted cluster bean or stink bean) commonly known as Yongchak in Manipur is a plant of the genus Parkia in the family of Fabacea. It bears long, flat edible beans with bright green seeds, the size and shape of plump almonds which have a rather peculiar smell similar to but stronger than that of the shiitake mushroom, due to sulphur containing compound, also found in shiitake, treeffles and cabbage. It is also known as petai or pete in Indonesia, Malaysia and Singapore. The petai tree can grow to about 30 meters. It bears flowers in a light bulb shaped mass at the end of a long stalk. The flower secretes nectar that attracts bats and other pollinators. The fruit emerges as long twisted, translucent pods in a cluster of seven or eight pods. When those pods are mature, within them will reside the petal beans or seeds. Petai or Yongchak in Manipuri has earned its nickname “Stink bean “because of its strong smell which is pervasive. It lingers in the mouth and body. Like other beans, their complex carbohydrates can also cause strong-smelling rectal gas. The great pungent smell of yongchak like asparagus  tells the presence of Thiazolidine-4-carboxylic acid, a cyclic Sulphur containing Amino acid, that give a strong smell to one’s urine, an effect that can be noticed up to two days after consumption. Biologists and observers reported that the content of biochemical and nutritional values in the tender pods were superior to other stages. The tree bean serves as the basic needs of protein and fat to meet the ever-increasing requirements. The elements and minerals present in the Yongchak or petai are: 42.50% Fe, 36.33% C, 20.00% protein, 15.38% Vitamin B2, 13.00% carbohydrates. Its calorific value is 124 Kcal/cup calories. The health benefits of Yongchak or Petai are: ease of depression, PMS ( Premenstrual Syndrome), Anemia; Blood pressure; constipation, hangover, heartburn, Morning sickness, mosquito bite, nerves overweight, ulcer, temperature control, smoking stress, strokes, warts, healthy eye, improve brain power and concentration, improving digestion and seasonal affective disorder.  The seed as well as tender pods are known to cure stomach disorder and regulate liver function. Pods pounded in water are used in cleaning the face and head. The soil extracts of the plant possess insecticidal properties. The wood can be used as a source of paper pulp.

In the marketplace, depending on the country of origin, parkia species may be labelled Wakerec, Petai, Yongchak, in Thadou Jonglha. They are best when combined with other strongly flavoured foods such as garlic, chilli peppers, dried shrimp or shrimp paste as in sambal petai. When young, the pods are flat because the seeds have not yet developed and they hang like a bunch of slightly twisted ribbons, pale green, almost translucent. At this stage, they may be eaten raw, fried or pickled. Young tender pods with underdeveloped beans can be used whole in stir-fried dishes. The seeds are also dried and seasoned for later consumption. When dried, the seeds turned black. Petai beans or seeds look like broad beans. Like mature broad bean, they may have to be peeled before cooking. In Indonesia; Petai (yongchak) is very popular in the highland of Java and Sumatra, especially among Sudanese, Minangkabaue and many other people in a different culture of the Island. In Sudanese cuisine, petai might be eaten raw with sambal as part of lalab, fried or grilled. It can also be stir-fried and mixed with oncom. In Java and Sumatra, it also might be added to sayur lodeh or sambal gorengati petai (fried chicken liver in sambal & petai). Nasi goring kambing petai is a popular variant of nasi goring (fried rice) with goat meat and petai. In Minangkabaue cuisine, it usually becomes part of lado ( Minang sambal) for ayam pop ( padang style fried chicken). In Manipur, it is grown mainly on all the hilly districts especially Kuki inhabited areas, who called it Janglha, Hamar tribes called it Zawngta. It is grown in the hill districts and some part of Manipur valley too. Varieties found here are somewhat harder than the counterpart of Thailand or Malaysia. The wild varieties from the hills are more commonly sold in the market. Some species of parkia are grown in small scale by farmers in north-east India. In mainland India, it is grown as an ornamental plant, shade and border tree.

This bean has become an important ingredient in many food items in Tripura too. In Manipur, the seeds or the bean as a whole are eaten by preparing a local delicacy like Hmarcha deng, Eromba or Yongchak Singju (Salad). Eromba is a very common cuisine in Manipur made with boiled potato, fermented fish, chilli and other vegetables.  Yongchak singju is another favourable side dish made with parkia cut into fine pieces and then mixed with red hot chilli paste. Parkia is also used for making various other dishes with fish and vegetables. The Kuki tribe from Northeast India called it Janglha and relished it with almost like a special vegetable. Rongmei Tribe of Manipur, Nagaland and Assam called it Kampai, which is cooked with meat or prepared as salad and sometimes seeds are eaten with chutney made of dry fish. The Hmar tribes of Assam, Mizoram, Meghalaya and Manipur called it Zawngta and mainly prepared it with chilli, sodium bicarbonate, a little amount of salt and special fermented pork called saum and called it Zawngta-rawt. In Mizoram, the Mizo people are also very fond of it and called it zawnglah and they use to prepare it with chilli and fermented pork called saum which is same as sathu of Manipur.

There is a vast decline of yongchak population in the valley of Manipur and no reason is cited for the cause of becoming a vulnerable species. No report is yet made. Many believe to be the wave of mobile phone and mobile tower; others reported the change in environmental factor while remaining fixed on plant pollinated animals.  In short, all three parameters are related to the yongchak issue. It is reported that electromagnetic wave/ radiation from mobile phone and tower affects the birds, animals and plant environment. The fact is, Biologists and researchers believe the loss of yongchak is due to the verticillium wilt disease spread all over the valley of Manipur, the symptom is quite similar with the radiation caused by the mobile tower. It is also reported that the electromagnetic wave also distracts the flying foxes (bats) to reach its final destination for food, shelter and to pollinate.  Flying foxes represent a major role in the principal pollination pattern and seed dispersal of the tree bean. Climatic condition is also another factor. The drying up of yongchak in the valley of Manipur may be due to rise in temperature or precipitation as yongchak needs warm climatic condition. A detailed study is required to evaluate the population status of parkia in Manipur.