Chief guest of the function, commissioner IPR M Joy Singh stressed on the importance of observing the day in commemoration of the establishment of the Press Council of India in 1966. 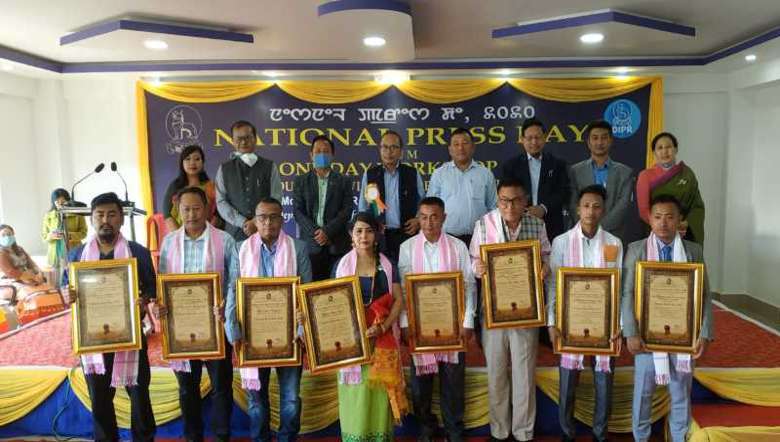 The National Press Day, 2020 was observed on Monday at the Auditorium of the Department of Information and Public Relations, government of Manipur, organised by the department.

Speaking as the chief guest of the function, commissioner IPR M Joy Singh stressed on the importance of observing the day in commemoration of the establishment of the Press Council of India in 1966.

He said that the observation of the day on November 16 is symbolic of the freedom of speech bestowed on a journalist and its importance in shaping a society.

Underscoring the vital role of the media, Joy appealed to the journalists’ fraternity to understand their responsibility towards the society and continue to play a constructive role in the society building process.

Heisnam Balkrisna, director IPR, speaking as the president of the function highlighted welfare measures initiated and taken up by the department this year.

He said the department has increased the cash award for the Best Editor Award on National Integration and Communal Harmony to Rs. 40,000 from Rs 25,000. Furthermore, pensions for journalists have been increased to Rs.8,000 from 4,000 and family pension to Rs.5,000 from Rs. 2,000. He further congratulated the recipients of the Manipur State Journalist Award, 2020.

As part of the observance, Manipur State Journalists Award was conferred to media persons of the State in eight different categories for Editorials, news items and articles published during the calendar year 2019.

The morning session was followed by a workshop in the afternoon session on ‘Role of Media during the COVID 19 pandemic and its impact on Media.’ Dr. A Ibomcha Sharma, Head of Office, Regional Outreach Bureau Imphal moderated the workshop while Salam Chingkehinganba, Sub-editor The People’s Chronicle and member All Manipur Working Journalists’ Union, Yumnam Rupachandra, Chief Editor Impact TV, and Ramkung Pamei, Editor, The Cham and president Manipur Hill Journalists Union (MHJU) presented papers as Resource Persons.

Joy also administered a pledge to follow COVID Appropriate Behaviours during the function which was conducted with strict observance of COVID SOP. Officers and staff of DIPR, eminent media persons of the state and others attended the function.

This year a Selection Committee comprising a panel of jury members appointed by the government was also constituted for the selection of awardees. The panel of judges included experts from different fields including journalism, literature (nominated by State Kala Akademi), concerned subjects and categories headed by a chairman. (DIPR)