Sound of firecrackers reverberates across Imphal on Diwali night despite ban 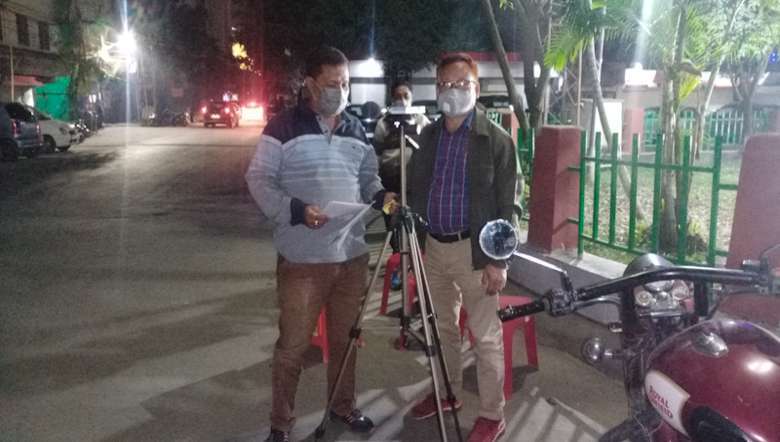 One M Tomba, who was sitting in his house balcony watching his house being lighted with decorative light, startled by the blasting sounds, angrily said, “Despite the ban on firecrackers by concerned authority, you can see what is happening.”

Sakhi, a woman from Konung Mamang, said it is difficult to explain to children about the ban on firecrackers. “Children of various localities are playing with firecrackers having loud sounds. No one is asking them to stop. People who are working in and around the kitchen are constantly being frightened for hours,” she said.

Police, who were doing duty, announced to stop firing the crackers. For a while people stopped but as soon as the police left the spot, people continued letting off the crackers.

Meanwhile, two vehicles were involved in an accident at Samushang, Uripok Kangchup road after they tried to dodge a firecracker that was lit in the middle of the road. As the vehicle dodged the bursting cracker, it collided with another driven by a middle aged man with his wife and child on their way back to their home. While no one was hurt seriously, the middle aged man lamented, “It could have avoided if the residents have followed the notice of state wide ban of fire crackers”.

Shopkeepers also sold the crackers by increasing the price. One of the shopkeepers from Checkon area said firecrackers are not available in the market as the government has banned it and the traders have not received license to sell firecrackers. However, some businessmen brought firecrackers from outside the state and made them available to local shopkeepers in high rate.

Various firecrackers are there, different shopkeepers are selling in different prices, said a shopkeeper.

Meanwhile, the ambient sound recorded in MG Avenue, Imphal by the Manipur Pollution Control Board (MPCB) on the night of Diwali is found to be illegal, though strict curfew is imposed in the state in the night time.

But, interestingly the ambient sound recorded during this year Diwali is found to be less than the last year Diwali.

According to the official report of MPCB the average sound level recorded in the MG Avenue area from 6pm till 8pm is 69.6 decibel on Sunday and 70.3 decibel on Friday.

In the last year on Diwali, the average sound level in the MG Avenue area from 3pm till 7pm is 78.25.

As per the Central Pollution Control Board, the sound level in commercial areas should not be more than 65 decibels till 10pm and 55 decibels after 10pm.

The air and sound ambient has been monitoring since a week before Diwali and it will continue to monitor for a week after Diwali as instructed by the Central Pollution Control Board as a part of a special monitoring of ambient air and noise during Diwali.

The instruction was given following an order of the Supreme Court issued in 2018, which stated that all the state and union territories of the country should carry out a short term monitoring of their cities for 14 days with regards to bursting of firecrackers which would be helpful in regulation and control quality of aluminum, barium and iron used in the manufacturing of firecrackers.

The district magistrate, Imphal West has also ban on firecrackers saying that there is likelihood of causing serious annoyance or injury to the general public in view of the volatile law and order situation in the district if there is no control on sale and use of crackers in the district during the ensuing Diwali Festival. Such injury and annoyance may result in serious breach of peace, disturbance to public tranquillity and danger to human lives and properties, the notice said.

Bursting of fire crackers releases copious amount of harmful chemicals which have severe impact on the respiratory health of the vulnerable groups and such pollutants can further aggravate health conditions of COVID-19 positive persons in particular and general public, the DM said.