Mired in excess, COHSEM at its Nadir

COHSEM chairman allegedly appointed own daughter, 29 others in excess 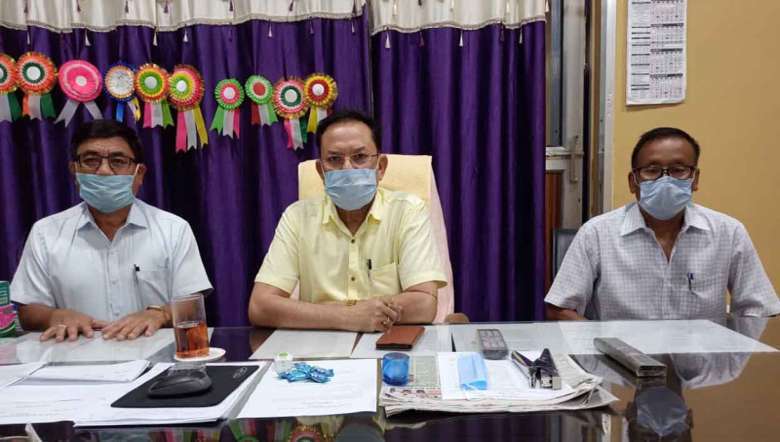 The Council of Higher Secondary Education, Manipur (COHSEM) saw its birth along with the Statehood of Manipur in 1972. In its initial stages, it had stalwarts of the likes of playwright and novelist N Kunjamohan Singh manning the affairs. But over time, the posts of chairman and secretary were filled up as political posts; appointed not because of their academic brilliance or integrity in their respective fields but more because of their closeness to the political party in power.

The degrading of COHSEM can be said to have begun many years ago but it can now be said to have reached its Nadir under the chairmanship of Lamabam Mahendra Singh and secretaryship of Chabungbam Biren Singh. This has been amplified by the manner in which they have been running the Council, not as an autonomous body tasked with preparing students in the last stage of their school career but more like a family business, hiring and firing employees at their whims and fancies. And amongst those employed includes the daughter of the chairman himself and close relatives of other office-bearers.

Things came to light when in November 2019 the Council inserted an advertisement for recruitment to 19 posts. It was not placed in any of the popular morning dailies of the state but in an evening newspaper with limited readership and that too for one day only. But when the selection process was finally over, it was found that altogether 49 persons were appointed against the advertised posts of 19 posts that is an excess of 30 persons (The advertisements were carried out vide Notification no.1/2/92 HSC(Vol-V) dated 5-11-2019). The posts called for were for two-Assistant Programmers, 7-LDA,3-Drivers and 7-Grade-IV /Peons respectively.

But what appeared more shocking is the fact that amongst those recruited, topping the list was L Ranjita Devi as a humble peon. But the fact remains that she has not attended office for a single day since her appointment but her salary continues to be credited to her bank account every month without fail. What also makes interesting reading is also the fact that Bijaya Senjam, who is the wife of the legal advisor of the Council, Naorem Jackson also finds a place as an assistant programmer. Another Dinesh Adhikari, son of a council member, and Pheiroijam Holyfield, son of the Controller of the Council, were also appointed as assistant programmers. L Amitkumar Singh, a relative of the chairman was also included in the honour list as an LDA. Another Nameirakpam Teena, daughter of a Section officer, a close aide of the chairman, was also selected as an LDA. Also appointed as an LDA was N Boinaocha Meitei, son of a deputy secretary of the Council and close to the chairman was also appointed. Yet, another relative of the chairman, L Omikanta Singh was appointed as a driver. Another relative of the secretary Chabungbam Biren Singh namely L Pinky Devi was appointed as a peon besides that of Sanjoy Ch. as a driver, who is also a close relative. Also finding a place as a peon was Th Indurani Devi, who is a sister of a joint secretary of the Council. Summing up the list of near and dear ones appointed was Mandela Thangjam, said to be a close relative of a joint secretary of the Council as an LDA. Besides these extra 30 who were appointed clandestinely, another five Lower Division Assistants (LDA) were also appointed on daily wages during the lockdown period.

According to inside sources in the Council, the prevailing market rate for non-relatives for the posts advertised for was between Rs.8-10 lakh for Grade-IV employees, Rs 12-14 lakh for LDAs and above Rs.20 lakh for assistant programmers. The rates for daily wage workers is still unknown till date. But it is evident that the chairman had recently purchased land in Kwakeithel and constructed a four-storied building.

The Council being an Autonomous institution does not get any grant-in-aid to it, but its budget is drawn from the fees it receives from the students and the various educational establishments. And that perhaps accounts for the fact that the registration/examination fees collected from students was increased for Rs.1,600 to Rs.2,000 per student since last year and the fees for change of address of schools was hiked from Rs 1 lakh to Rs 10 lakh. The chairman is said to have justified the hike in the rates to the employees, stating that it is augmenting the revenue of the Council. The Council has on date 166 employees and the last budget was Rs.14 crore.

Also, coming into question is the manner in which the chairman treats the employees under him. Four persons were suspended on charges of non-attendance during the Covid-19 lockdown period. They are K Bijoy Singh - Upper Division Assistant, L Sanathoi  - Lower Division Assistant, Wangkheirakpam Ajitshwor Grade - IV and P Gaseng Gapou also Grade-IV. They were not served with any mandatory show cause notices but were summarily suspended on charges that they did not sign the attendance register, which insiders claim that practice, not in vogue. Also, while no major swindling of funds has been detected, it has been reported that the chairman and the higher-ups purchase expensive watches and mobile handsets out of the council’s funds which has been shown as expenditure under the head of purchase of consumables meant for daily office use.

The accounts of the council do not come under the purview of the Accountant General of India’s office but are done by the personnel of the Local Fund Audit of the state and the auditors invariably return home with their palms greased.

The chairman apparently has not heard of the word nepotism for he might plead not guilty on charges of taking bribe money for appointing his own daughters or the relatives and near ones of the other office-bearers of the Council. And the Chairman and Secretary, if found guilty, should be accorded befitting punishments for nepotism or corruption even if they cease to hold office in the near future.

What is urgently required is for the chief secretary to register a Vigilance Case against the chairman and probe the matter and bring to book the culprits. It will also augur well for State Education Minister Salam Rajen to make a policy change and have the chairman replaced by an IAS officer who can be rotated every two years instead of appointing political appointees who soon rule the roost as their personal fiefdom as in the present case.