It is learnt that the talks are in advance stage to resolved the only bottle neck, demand of the NSCN-IM to have separate Naga flag and constitution. 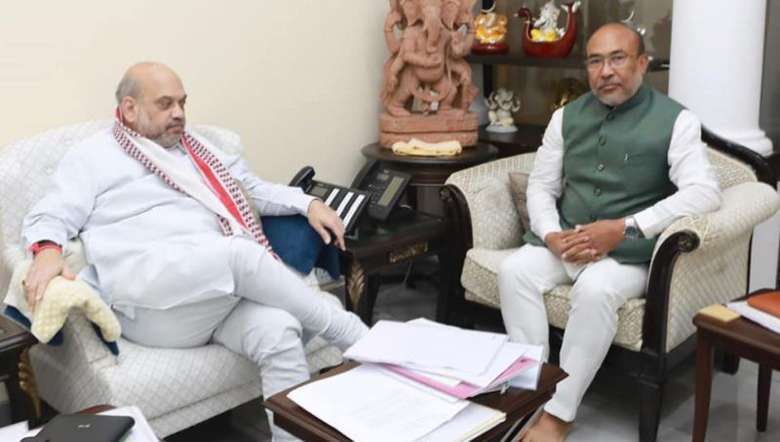 The chief minsiter said that the Health Minister of Assam, Himanta Biswa, assured that he will invite him (CM Biren) and the opposition leader of Manipur on Indo-Naga peace deal. However, Biren said that he has not received any official invitation yet.

Nevertheless, he opined that his government will never compromise on any issue relating to the integrity of the state.

Meanwhile, reports are doing the rounds that CM Biren has been invited to New Delhi to discuss on issues pertaining to Indo-Naga peace talks. It is learnt that the talks are in advance stage to resolved the only bottle neck, demand of the NSCN-IM to have separate Naga flag and constitution.

The Co-ordination Committee on Manipur Integrity (COCOMI) and the Naga National Political Groups (NNPG) in a meeting resolved that the outcome of Indo-Naga political talks should not affect the neighbouring states of Nagaland.

A statement issued by the assistant co-ordinator of COCOMI (Media), Jeetendra Ningomba has stated that the meeting, which was attended by six representatives of COCOMI and 10 representatives of NNPG, discussed on the unification of the entire states of northeast India to bring under a common future for major development in the region.

“The Central government has made certain strategies to tear apart the states of northeast. For instance, although more facilities have been provided by the government to reach the capital city of India from the northeast states, however most of the national highways within the states have been left out to remain in deplorable conditions. It seems New Delhi is much nearer from any state of northeast India than to travel within the seven states of the northeast, and this is undoubtedly a strategy to make the people of the region stay apart. The government is trying to pull-in the people of northeast to mainland India rather than freeing them to mingle in their own way,” said COCOMI in the release.

The release further said that there are only a few mongoloids existing in the country and most of them are from northeastern states but the Central government is making all the possible policies to break the good relationship between the seven sisters of the northeast. The Trans Asian Railway and Act East Policy will only bring deterioration to the entire community of northeast but not development if the policies are glanced in larger scale, it added.

During the meeting, convenor of the Working Committee, NNPG, N Kitovi Zhimomi stated that the group stands for the welfare of Nagas in Nagaland but never for the Nagas who have settled in other neighbouring states.

“Our only wish is to end the long waited Indo-Naga Peace Talk in an amicable way. The main problem has been created by the Nagas from Manipur which has also brought several disadvantages to the Nagas of Nagaland. There is an apprehension that Article 371 (A) which is implemented in Nagaland would also be implemented for the Nagas in Manipur,” said Zhimomi in the release.

The representatives of NNPG further questioned the NSCN-IM that when it is hard to determine whether there will be sovereignty or not, how can there be a separate flag and constitution?

The northeast states can be categorised as under-developed as compared to other states of India and the need of the hour is to help each other and bring an amicable solution among the neighbouring states regarding the Indo-Naga Peace Talk. The decision of NSCN-IM should not affect the people of northeast, said NNPG in the release.