Party flag was flown in half mast and revolutionary gun salute was also offered as a mark of respect to the martyrs. 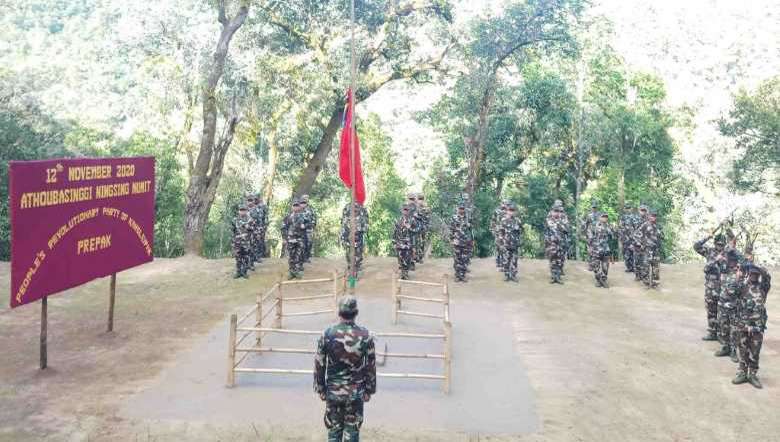 The People’s Revolutionary Party of Kangleipak (PREPAK) said that the People of Manipur stretching across communities and hills and valley observed “Athoubasing gi Ningsing Numit” (November 12) on Thursday.

A statement was issued by secretary in-charge, publicity and propaganda, PREPAK Leibaak Ngaakpa Luwang. It stated that befitting floral tributes were paid to those who laid down their lives in the struggle to regain Manipur’s independence and lighting of candles in entrance of households in the evening marked the observance.

The day was also observed in 701 Mobile Battalion, Tactical Head Quarter, Base Areas, Transit Camp and Training Centres of the Red Army. “The party flag was flown in half mast and revolutionary gun salute was also offered as a mark of respect to the martyrs,” it added.

“The revolution against colonial India’s policies backed by ‘Indian Occupational Force’ (IOF) has been necessitated by India trying to spread its roots of colonialism. The revolutionary movement is not demanding separation from India. Rather, it demands them to leave Manipur, which they have occupied and dominated in a wrongful manner,” the release said.

Claiming Manipur was never a part of India, it maintained interpreting the revolutionary movement to regain Manipur’s independence as a movement of separation from India is unreasonable and will never be accepted by world community. As such, the revolution will be carried on relentlessly as long as the objective is not achieved, it added.

The release continued that many have laid down their lives in the struggle for independence while many others will continue to do so. “The movement will be participated by every people of Manipur one day,” it said.

“A united revolutionary movement for independence will be witnessed when those, who believed in the professed economy and governance for convenience in colonising Manipur, open their eyes,” it stated.

The release also expressed gratitude to the people for observing the day and paying tributes to the ‘martyrs’ amid COVID-19 scare.

It added that Red Army of PREPAK will continue to strike against “Imperialist India” until PREPAK’s vision of independence, development and egalitarian society is achieved.