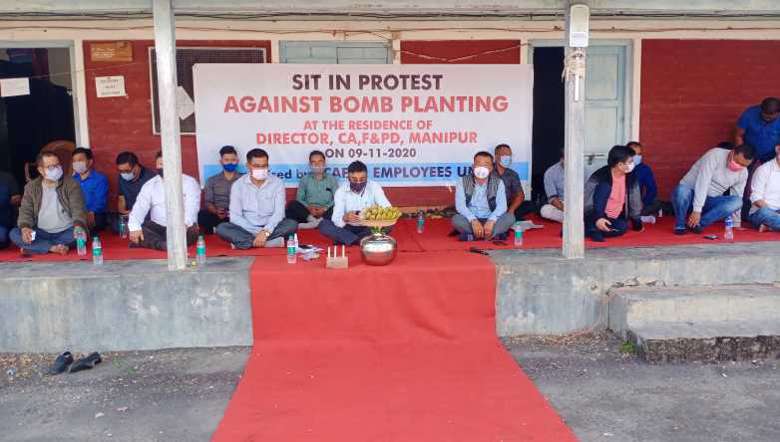 CAF&PD employees, condemning the planting of a hand grenade at the gate of the residence of CAF&PD director Ranjan Yumnam at Ningthem Pukhri Mapal, Imphal on Sunday night, staged a sit-in protest at the CAF&PD office campus at Sangaiprou, Imphal.Tuesday.

The bomb squad team of the Manipur Police had disposed of the bomb at Yairenpat, Imphal and the Porompat police registered a case and investigation is underway, according to reports.

Planting of the bomb at the gate of the director’s residence has caused panic among the locals and the employees of CAF&PD, said district supply officer of CAF&PD SA Halim.

The employees have been working hard to let the public get essential food supplies during the pandemic, Halim said and contended that targeting the employees of CAF&PD who do not even have any holidays is very unfortunate.

If there is any problem or misunderstanding in the functioning of CAF&PD department, the gate is opened to bring an amicable solution through dialogue, the employees said.

In another incident, on Monday noon, an unknown person handed a hand grenade to Imphal Municipal Corporation mayor L Lokeshwor.

According to the statement of the mayor, his peon brought a plastic bag to his office room, saying that someone has gifted him something.

When they opened a packet inside the plastic bag, they found the hand grenade inside the box, said the mayor.

Saying that he has not received any threat or any monetary demand, he appealed to responsible person or organisation to avoid such threats in the future.

Regarding the matter, a case has been registered at the City police station and investigation is underway.