"The result of the by-election clearly shows that the public are with the BJP government," BJP candidate O Lukhoi said on winning the by-elections in Wangoi. 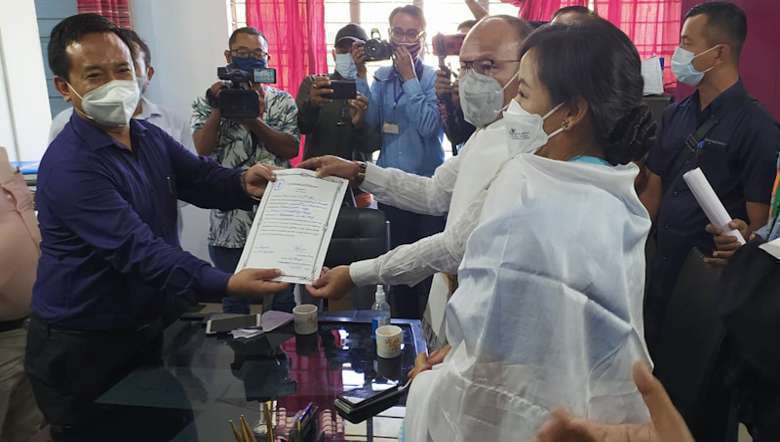 Declaring O Lukhoi Singh as the winning candidate of the Wangoi AC by-elections, Imphal West SDO Bunga Maibam Khuman handed the winning certificate to him soon after the counting of the poll votes on Tuesday.

"The winning of by-election in the three assembly constituencies is the result of all the welfare and developmental works take up by the BJP government under the leadership of Prime Minister Narendra Modi and Chief Minister N Biren," he added.

After receiving the winning certificate from the SDO, Lukhoi told mediapersons at Imphal West DC complex that he won the by-elections through people’s support and love.

When asked about the portfolio, Lukhoi said that he will discuss it with Chief Minister N Biren Singh and will discharge his duty as per the portfolio he will be given.

Lukhoi added that he would try to bring development for both the people of hills and the valley after taking the charge.

The counting of votes of the Manipur by-elections that was held on November 7 began 8 am Tuesday. Despite the fear of COVID-19 attack, a high voter turnout of 92.54 per cent was registered in the by-elections of the four assembly constituencies of Manipur - Wangoi, Lilong, Wangjing Tentha and Saitu.

Wangoi had recorded the highest poll percentage with 93.26 per cent, followed by Lilong with 93.3 per cent votes, Wangjing 92.3 per cent and Saitu 91.59 per cent.