The main reason why the twin statue was erected is to show the people that there are such leaders that think for the welfare of both the people of hills and the valley, Hongman Tangkhul village Akhui Jimik said. 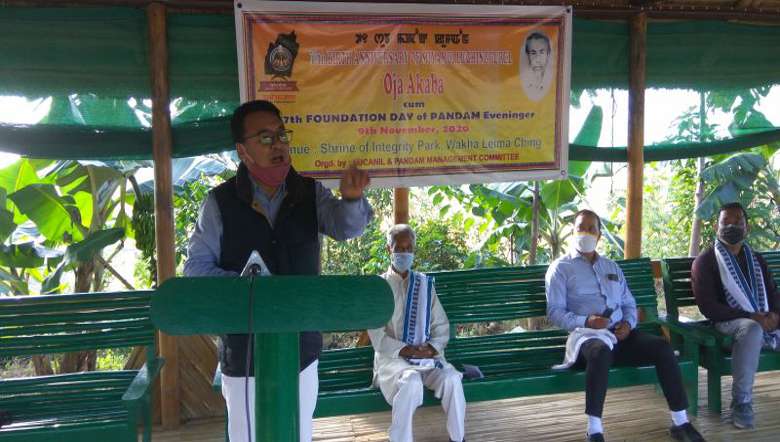 “If people know the inner meaning why twin statues of R Suisa and Chingsubam Akaba were erected at a same place though they are from different ethnic communities, then both the people of hills and valley will understand their belongingness and development could be paced up,” said village chief of Hongman Tangkhul village Akhui Jimik.

Akhui said though the day is observed as the birth anniversary of Akaba, people need to understand why the statues are erected at the same place.

Dr Uthan who was also presidium member of the function told that the reason behind increasing number of COVID-19 positive cases and death count is public being reckless. To control COVID-19, public support and initiatives are required in addition to various steps taken by the government, he added.

Uthan further appealed to the people to wear face masks, washing of hands frequently and to use hand sanitiser and to maintain social distance to avoid further spread and infection.

“It might not be possible but if a video is circulated how COVID patients are struggling to get cured, then people might realise how much the virus is detrimental,” he stated.

President of Manipur Hawker Association, Ajit Wangkhemcha expressed his gratitude for taking part in such programme. He assured to extend help from the association for the bilingual eveninger.

To honour COVID warriors and as a part of the function Dr Uthan was awarded a cash award of Rs 50,000. Later Uthan donated that amount to CM COVID relief fund to be utilised for COVID patients.

Hand sanitiser, face masks and a sum of Rs 10,000 were handed over to hawkers through its president, Ajit Wangkhemcha.

Ration items, face masks and hand sanitiser were also distributed to the locals of the area of Shrine of Integrity Park, Wakha Leima Ching, Imphal East through its local club members.