Manipur Forest Minister Awangbow Newmai inspected the work progress of the reconstruction of the Irang Bridge near Taobam village on the Imphal-Jiribam National Highway 37 on Monday. 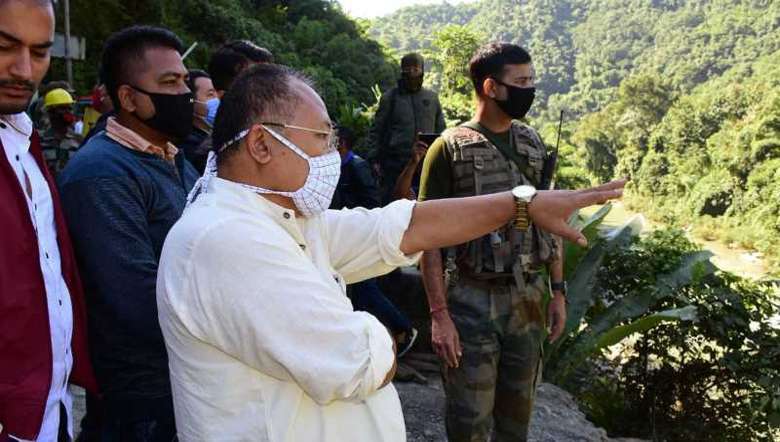 Forest Minister Awangbow Newmai on Monday said he has been given assurance that the reconstruction work of Irang Bridge will be completed by November 13.

The minister inspected the work progress of the reconstruction of the Irang Bailey Bridge near Taobam village on the Imphal-Jiribam National Highway-37 on Monday.

After interacting with the officials at the spot, the minister told the media that he has been given assurance that the reconstruction work will be completed by November 13 and the bridge will be open for the public by November 14.

He said that a team of National Highways and Infrastructure Development Corporation Ltd (NHIDCL) and 52 Engineer Regiment of the Indian Army is working hard to restore the Bailey bridge at the earliest. The minister also said that he is happy to see the collaboration work by the team in progress.

Awangbow also conveyed that chief minister N Biren Singh spoke to the Union Minister of Transport on Sunday and appealed for the early restoration of the Irang Bailey Bridge and also demanded for construction of RCC bridge over the Irang River.

He said, “The chief minister has informed him that there is delay in the construction due to non-availability of bidders after the tender process even though sanction has been given for the construction of RCC Bridge.”

The chief minister has also instructed the NHIDCL to complete the reconstruction work at the earliest, said Awangbou.

Awangbow also said that the collapse of the Irang Bridge has disturbed the normal transport of essential commodities by the truckers. NHIDCL has been asked to fill the potholes along the National Highway and maintain the road condition, he added.

Saying that various programmes will be undertaken along the national highway including road widening, the minister said that the COVID pandemic has affected the work progress.