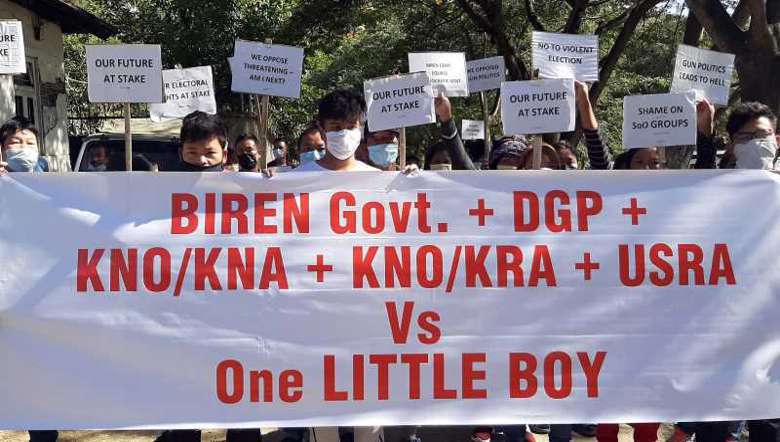 Ahead of the by-elections vote counting on Tuesday, hundreds of young Congress party supporters on Monday rallied for re-poll in 51-Saitu Assembly constituency of Kangpokpi district. The Returning Officer (RO) of Saitu AC, however, recommended against repoll.

The participants of the rally, organized by the Manipur Pradesh Youth Congress Committee, held banners with slogans such as, “We want immediate re-poll”, “Biren Govt.+DGP+KNO/KRA+KNO/KNA+KNO/USRA vs one Little Boy”, etc. apart from placards which reads, “Our electoral rights at stake”, “Our future at stake”, “Shame on BJP led Govt.”, “Shame on SoO groups”, “We oppose threatening, am I next?”, “We oppose gun politics”, “Gun politics lead to Hell”, “Stop booth capturing”, “Puppet Returning Officer”, etc.

The rally began from Brig M Thomas Ground and culminated at the DC office gate.

Meanwhile, Saitu INC candidate Lamtinthang Haokip accompanied by his chief agent and general secretary, including few other supporters, met RO Subinson Sapam, and produced a video clip of the RO receiving the INC complaint letter submitted on Sunday to the media.

The RO, however, said he was not aware of it.

“As per the guideline I have verified the registered voters, accounts of votes, presiding officers dairy and any other complaints received from the sector officers and I have recommended for no re-poll. It is now up to the Election Commission to decide what to do,” the RO said.

The INC candidate, however, objected the presiding officers’ report of various polling stations by producing the voters slips of the INC supporters who were denied their franchise rights on the polling day.

Speaking to media persons at the campus of DEO/DC office after meeting the RO, Haokip claimed, “Despite my earnest appeal to the RO, he rejected my plea since he acted on behalf and under instruction of Manipur Chief Minister N Biren Singh forfeiting his constitutional duties and responsibilities as public servant”.

“The RO acted in such manner fearing that all the video footages will reveal all the unconstitutional and undemocratic activities inside the polling stations/booths such as selected few voters under the instruction of KNO/KRA, KNO/KNA, KNO/USRA who are under SoO with state and Central government along with some intimidated village chiefs or authority who acted on behalf of the said UGs while pointing out that no voters who support the INC candidate are allowed to enter the polling booths to franchise their rights,” Haokip alleged.

Haokip also said, “BJP candidate of Saitu AC, Ngamthang Haokip commented in local dialect which went viral in social media that under the instruction of Chief Minister N Biren Singh, he got the full support of the aforementioned UGs and declared that people who vote for INC will be considered as anti-BJP government in the state and Central.

“We are against the schedule vote counting tomorrow until all video footages in all the polling booths are provided to us and if the vote counting is not rescheduled and re-poll is not held as demanded we will take legal action and law will take its own course of action,” the INC candidate said, cautioning that we will not spare anyone indulging in unconstitutional and undemocratic act in the by-election.

Haokip urged the Election Commission of India to take cognizance of the matter seriously and take immediate action. He also said the Returning Officer of 51-Saitu (ST) AC must be terminated immediately for acting on behalf of the BJP candidate and the BJP government of Manipur.

The INC candidate also appealed to the people of Manipur “to strongly condemn such unconstitutional and undemocratic electoral process”.

Meanwhile, Manipur Pradesh Youth Congress Committee president Mahananda Nungleppam said that the recently concluded by-election is “not election but selection”. “The functioning of the BJP-led government under the leadership of Chief Minister N Biren is no less than a dictatorship government,” he said.

“I appeal to the Election Commission of India, Chief Electoral Officer of Manipur and District Electoral Officer of Kangpokpi to re-schedule the proposed vote counting tomorrow and take necessary action by holding re-poll in the larger interest of democracy and the franchise rights of the people,” he added.