In a first in Manipur, 12 COVID-19 patients exercised their franchise in Wangoi constituency. 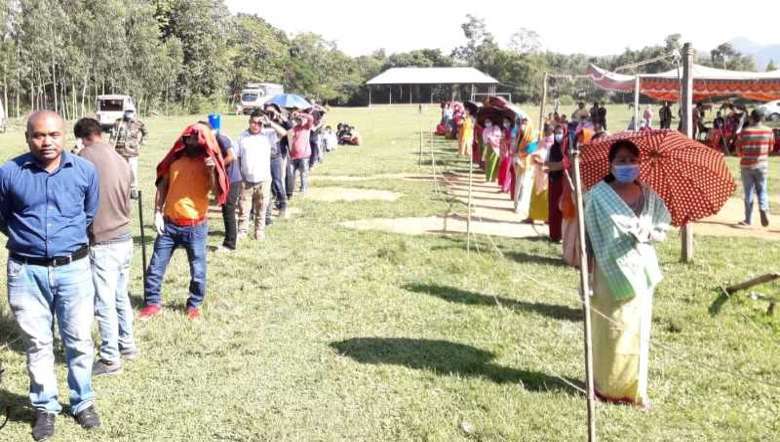 Despite the fear of COVID-19 looming large, a high voters turnout of 92.54 per cent was registered in the by-elections of the four assembly constituencies of Manipur on Saturday. In a first in the state, 12 COVID-19 patients exercised their franchise in Wangoi constituency. of Thoubal district.

K Bono Singh, joint Chief Electoral Officer (CEO) incharge said voting began at 7 am as scheduled maintaining strict SOPs and concluded at 5 pm except for two polling stations of Wangoi that went on till 7.20 pm as a large number of voters were still in the queue.

The Joint CEO said that by-polls in all the four constituencies was by and large peaceful except for some stray incidents. However, this did not affect the voting process, he said.

The joint CEO informed that the poll percentage in Wangoi recorded the highest with 93.26 per cent. In Lilong constituency 93.3 per cent vote was cast, 92.3 per cent in Wangjing Tentha and 91.59 per cent in Saitu.

Despite the options for postal ballot, as many as 12 COVID-19 patients cast their votes in Wangoi constituency. As per the guidelines of the Election Commission of India, Covid-19 patients who are quarantined can cast their votes in the last hour of polling under the supervision of health authorities. PPEs (Personal Protective Equipment) were provided to every Covid-19 positive voters before entering the polling booth. Following the guidelines for a Covid-19 safe election, safety measures were taken up at each polling station. Every voter was provided hand-gloves, face masks and sanitisers, and body temperature of the voters was checked before the entry of the polling booth for casting votes.

However, in Presidency college, Motbung this reporter witnessed a large number of voters standing in queue without maintaining standard operating procedure (SOP). There were also allegations of proxy voting in some of the polling stations within Saitu. The joint CEO, however, said that no formal complaints were received till the time of filing this report.

Altogether 11 candidates are in the fray, including four INC, three BJP, three independent and one NPP. The ECI scheduled for by-polls in five assembly constituencies. However, BJP candidate GS Haupu won the Singhat seat, one of the five constituencies, unopposed after his rival candidate withdrew his nomination. The counting of votes will be held on November 10.