The delimitation debate is more than the alleged unnatural population growth in specific sub divisions of the hill districts. The contestation between the hills and the valley centres around who holds the power and dictate the course of ethnic politics in Manipur, writes Richard Kamei 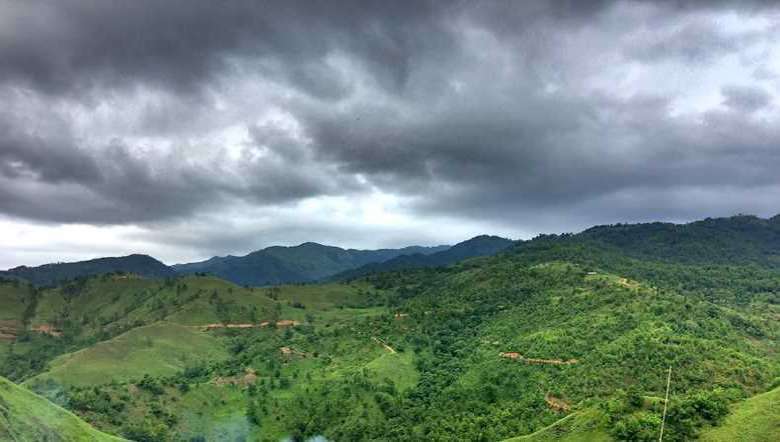 On the history of administering the hill districts of Manipur,Gangmumei Kamei wrote that with the conquest of Manipur in 1891 by the British, the hills came under the British Rule. He noted that the rule and control of the hills were indirect. The British introduced collection of house tax as a part of their administration. After the incident of Kuki rebellion 1917 to 1919, the British took serious note of it and in 1919, the Chief Commissioner of Assam framed new measures for the administration of hill areas. This marks the start of direct control of the hills under the British rule till 1947. Then few years before Manipur was merged into India in 1949, the Nagas in the hills waged a movement under the banner, Naga National League(NNL) espousing that they be not included in the Manipur state as enshrined in the Manipur State Constitution Act, 1947.  In 1948, the NNL boycotted the first Legislative Assembly election of Manipur. They also claimed that the Manipuri Raja never conquered them.

The history as such informed the tribes of Manipur in the hills that their interests, aspirations, and rights have always been undermined, disregarded, and ignored. The hills, with tribal communities, Naga, Kuki, and other tribes, have been at the receiving end of the politics and cultural dominance from the valley of Manipur dominated by Meitei community. The ethnic politics and contestation animate Manipur every now and then. This divide is seeped into ethnic politics where the hills people perceive that they are underrepresented.

Manipur attained statehood in 1972. Based on 1971 census, a third delimitation allotted 20 seats for the hills and 40 for the valley in the assembly of Manipur. Out of 20 seats in the hills, 19 werereserved for Scheduled tribes. The representation in the given mannerhas been a bone of contention as the tribal communities from the hills feel that their interests and concerns are being undermined and disregarded. The hills occupy 90 per cent of Manipur and the valley 10 per cent, and out of the total Manipur population, currently the share for the hills as per census 2011 is close to 43 per cent against 57 per cent for the valley.

The hills were anticipating a fair representation out of the fourth delimitation exercise based on the Census 2001. However, the delimitation was stalled for Manipur upon complaints by the then Manipur government. They alleged ‘unnatural’ population growth in few sub divisions of the hills and cited apprehension in the state if delimitation exercise went ahead. The provision of Delimitation Act, 2002 constituted the Delimitation Commission for the purpose of demarcating constituency boundaries. As per the act, the next delimitation will not take place until the first census after 2026.

After a long wait, the Delimitation Commission has been constituted on March 06, 2020 for J&K, and the four North-Eastern states, namely Assam, Arunachal Pradesh, Manipur and Nagaland. Delimitation for the rest of India based on the census of 2001 had already been conducted.

Early this year, announcement for delimitation exercise led valley based political parties and civil societies raised an objection to delimitation based on Census 2001. On the contrary, the hills sought the centre for a smooth delimitation process as they have been waiting since several decades for a fair and equitable representation in the state assembly.

The long delay of fourth delimitation is seen as denial of rights and subjugation to tribal communities. Sensing the simmering protests from the valley and the will of the centre to allow delimitation to take place, tribal bodies came out with a statement applauding the centre’s move for constituting delimitation commission and countering the valley based political parties and civil societies.

The stake of tribal people in delimitation is so high that it has united the Nagas and Kukis tribes where they often share a bitter relationship from the past. At this point, their voices are carried forward by All Tribal Students’ Union, Manipur (ATSUM), Kuki Students' Organisation, General Headquarters (KSO-GHQ) and All Naga Students’ Association, Manipur (ANSAM) in their memorandum released on June 29.

In their statement, they extended appreciation of the move of Government of India to carry out delimitation based on 2001 census by rescinding the order of February 8, 2008 which halted the delimitation of assembly and parliamentary constituencies.  They anticipated for a just and fair process towards equitable representation for tribal communities in the state assembly and thus correcting the existing ‘democratic imbalances’ in the state. They stressed further that, as per census 2001, Manipur has recorded a population of 22,93,396, out of which 8,82,130 is for the hills. The representation per seat for 40 out of 60 assembly seats meant for the valley stands at 35,294 people; it is 44,106 per seat for the 20 seats allotted for the hills. To this data, they indicated that it is classic case of under-representation of people from the hills. They have presented reasons behind the high growth rate of population in the nine subdivisions of the hill districts of Manipur as follows, “a) cross migration and concentration of population in Hill Districts during the ethnic class between Naga and Kuki in the early 90s b) social upheaval and communal crisis leading to mass exodus of hill people from valley to hill areas c) ignorance of Birth Control System and religious and social beliefs leading to high growth rate d) non-inclusion of a number of villages residing in remote areas by the enumerators in 1991 census.” It also noted that the Census Commission of India rectified and announced estimated population of three sub divisions of Senapati district, Manipur. They also took strong objection to the meetings of All Political Parties against Delimitation exercise held on June 15 and 17.

Close on the heels of  memorandum of ATSUM, KSO-GHQ and ANSAM, a tribal body named Manipur Tribals’ Forum for Delimitation (MTFD) which was formed recently, also voiced through their statement on delimitation recently in a letter addressing Prime Minister of India. MTFD sought for a smooth functioning of delimitation exercise without any hurdles and free from vested interest. It reminded that the tribal people have been anticipating since 1976 for the fourth delimitation exercise based on Census 2001, to remedy the wrongs and injustices in the form of unfair representation allotted to them. It added that owing to calculative political motive built on the speculation of law and order situation, the delimitation exercise in Manipur was stalled with the Presidential Ordinance, 2008. On this note, the MTFD conveyed “faith and confidence in the present Delimitation Commission of 2020 under the able chairmanship of Justice (Retd.), Ranjana Desai.”

It is important to point out here the pattern of migration among the hill people of Manipur in light of how the valley politics chime with a chorus that the hill people can come and settle anytime in the valley while they cannot do so in the hills. The lands of tribal people in the  hill district are accorded with protection. The migration pattern from the recent report of returnee in Manipur due to COVID19 crisis tells that migration of hill people outside the state is very high. 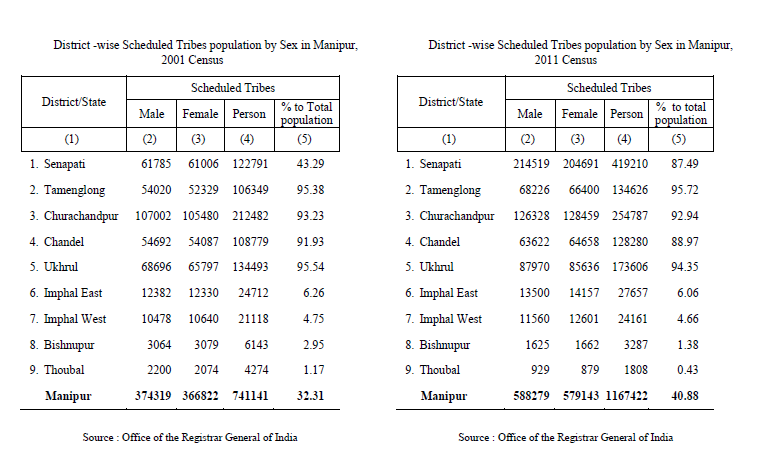 Further to migration, the tables above from ‘Statistical Handbook of Manipur 2017’ clearly shows that the number of tribes in the valley districts (Imphal West, Imphal East, Bishnupur, Thoubal) decreased between 2001 and 2011 censuses. This stands in contrast to the rhetoric that the tribes are migrating in large numbers to the valley of Manipur. The statistical data supports the fact that there is less migration from the hills to valley.

Where does the Power lie?

To substantiate further, the author here made a calculation from existing census data of Manipur. For this exercise, a census for 1971 is considered as Manipur attained statehood in 1972 and the third delimitation took place in 1973. Manipur had a population of 10,72,753 and out of which 3,49,695 belongs to hill districts and 32.6 per cent out of total population for Manipur. When apportioned to 60 assembly seats solely on the basis of population number, it comes to about 19.5 seats for the hill districts. This aligns with the allocation of 60 assembly seats for Manipur on the basis of third delimitation: 40 seats for the valley and 20 for the hills.

Census 2011 presents that the hill districts have 12,22,122 populations which is translated to 42.79 % of total population of Manipur, 26 seats are due for the hills in the 60-assembly seat.

The census data for 1971, 1991, 2001 and 2011 shows a share of population of the hill districts out of the total population of Manipur to be 32.6 per cent in 1971, 35.44 per cent in 1991, 38 per cent in 2001 and 42.79 per cent in 2011 census. This shows a consistent growth rate of population in the hill districts and the allegation denying this growth of population is possibly a ploy to disregard the reality and mislead the authority to the advantage of all the political parties from the valley. The denial of disproportionate constituency seats for the state assembly between the hills and the valley is supported by the data of census itself. In fact, the findings made by the Delimitation Commission on the basis of Census 2001 report, affirmed and acknowledged the unequal representation in the hill and the valley, and made a recommendation that the valley has to lose few seats and the hills to gain 5 seats.

Reflection and the Road Ahead

It is perplexing to make sense of circumstances created by political engineering from the valley which hinders the hill people from attaining and claiming their stake, rights, and representation. The recent past will connect to this processes at play if one looks into how decisions concerning the hills were taken; the carving of seven new districts in 2016, the three contentious bills to facilitate the passage of Inner Line Permit in 2015, the Third Amendment of Manipur (Hill Areas) Autonomous Council Act, 2008, etc. All of these were not placed before the representatives of hills people, Hills Area Committee (HAC), thus bypassing its mandated role in protecting the interests of hill people. The way how tribes are treated in these forms reveal clearly about the systemic marginalisation towards them in Manipur. It is on this situation that on common issues affecting every community of Manipur like Citizenship Amendment Act, Armed Forces (Special Powers) Act, or the Manipur University issue in recent past, hardly evoke all the communities to come together for a unified protest.

The delimitation debate is more than the alleged unnatural population growth in specific sub divisions of the hill districts. The contestation between the hills and the valley centres around who holds the power and dictate the course of ethnic politics in Manipur. The census data and experiences of people from the past in Manipur explains where power lies. The flexing of muscle using power will continue to make Manipur go through same old divisive environment and ethnic tension causing detriment to everyone more so on the hill people. To really move ahead in finding long lasting peace in the state, must come about by dominant community in acknowledging unequal power relations, and their control in socio-politico-cultural and economic aspects. Infrastructure development, access to healthcare, education etc can be improvised in the hills with the recognition of their stake by allowing them to claim, participate and make decisions as per their interests. This shall pave way for power sharing, fair representation, and participation to making Manipur a step towards peaceful and just society.

The writer is a doctoral candidate at the Tata Institute of Social Sciences, Mumbai