'Let us not cast votes for those MLAs who have resigned from their assembly seats'. 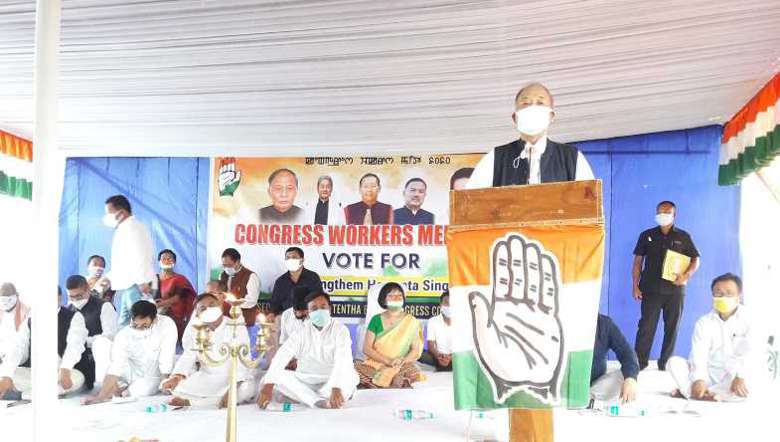 People must not vote for those MLAs who have resigned from their Assembly seats, former Manipur chief minister and Congress Legislature Party leader Okram Ibobi said.

“Let us not cast votes for those MLAs who have resigned from their assembly seats and teach them a lesson that the public are not in favour of them,” Ibobi appealed to the people.

Ibobi was addressing a Congress Workers Meet held in support of INC candidate of Wangjing-Tentha AC, Moirangthem Hemanta Singh, on Wednesday at Kodompokpi Western Side near Sport Complex, Wangjing.

The CLP leader said that according to the law, any member of a political party who switches from one party to another must be disqualified but instead of facing the disqualification, these people decided to resign to gain more political benefits.

He highlighted the remarkable achievements of the Congress regime like construction of Capital complex, Assembly building, High Court complex, Mini Secretariats in every district.

“I do not need to mention each and everything the Congress had done in every district over the course of 15 years. The public have witnessed it all,” Ibobi said.

The former CM further said that in 2004, former prime minister Manmohan Singh and UPA chairman Sonia Gandhi visited the state twice upon state’s request. During these two instances, the Congress-led state government persuaded them to affiliate Manipur University to Central University. The other one was to include RIMS hospital under the Central government as Manipur is a poor state, he added.

“Now I ask the BJP government in the state if they can also achieve the same thing that the then Congress government of the state had achieved, by pleading Narendra Modi to affiliate both Dhanamanjuri University and JNIMS to Central government?” the CLP leader questioned.

Former Union minister and AICC in-charge of Manipur, Bhakta Charan Das raised a series of questions to the gathering asking how a party that has no respect for women and differentiates between Hindus and Muslims will ever protect the integrity of the nation. He also asked if the people will give their votes to such kind of party that will not let you raise your voice against them.

While saying that BJP candidate P Brojen left his party and his people for his own selfish reasons, he appealed to the public to carefully think of the importance of the coming by-election and compare between BJP and Congress. BJP is exceedingly good with their words but never in action, he added.

“Our INC candidate, M Hemanta Singh is a good person and he will always stand with the public. He is the best candidate to become a leader of this constituency. I request everyone to support and help him in winning this by-election,” said Bhakta.

Chief Whip of MPCC, Govindas Konthoujam underlined the price rises and unemployment problem in the country and in the state. He referred to what chief minister, N Biren had said recently that he would point out every work done by his government.

“Can Biren point out what jobs have been given to our unemployment youths?” he asked.

He further stated when the BJP came into power in the state in 2017, everyone assumed that Manipur would be prosperous with the financial packages sanctioned by the BJP government in the Centre. He blamed the unfit BJP-led government in the state which could not bring any new projects or schemes for the welfare of the people.

“Why should we cast our valuable votes to the BJP candidate, P Brojen, who ran away from being an MLA and resigned from the post in the mid of his five-year term? Did he take the permission from the electorates who cast votes for him? Govindas asked.

It is quite meaningless to cast a vote again for such a candidate who was not willing to serve his people, he said.

He further narrated about the Congress candidate, Hemanta who joined politics in 1993, the same year when Brojen joined and they both got elected as MLA in the same year in 1995. He stated that Hemanta is the most deserving candidate for Wangjing-Tentha AC and appealed to everyone to vote for him.

MPCC president M Okendro said that candidates who are now working as MLAs and ministers in the ruling party were once candidates of Congress. They built up their fame and success while staying in Congress party. Now they have abandoned the party like the way people abandoned old currency, like the way some children abandoned their parents.

“Congress has been serving the nation for a long time and our leaders even sacrificed their lives for our freedom. Only the Congress party can strengthen secularism and democracy in the country.  I request the public to support the Congress party and give their valuable votes to Congress candidate Hemanta,” said Okendro.