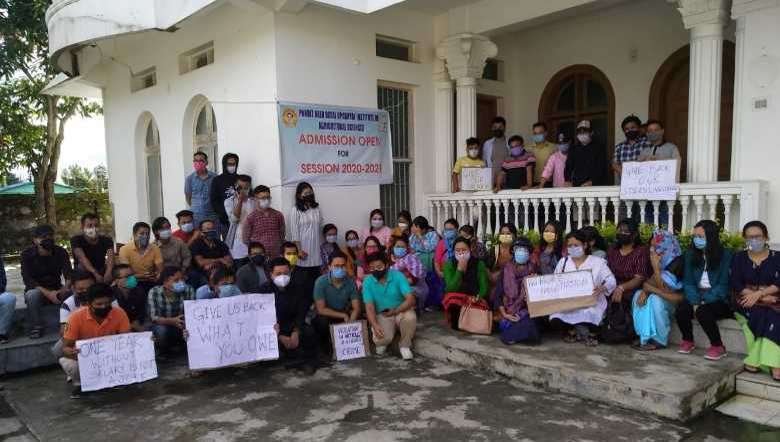 The Pandit Deen Dayal Upadhyay Institute of Agricultural Science (PDDUIAS) Employees’ Welfare Association has refuted the statements made on Tuesday by the chairman and director of PDDUIAS over non-payment of salary for months among others.

The employees said that they will take legal help against the concerned authorities if their demands are not fulfilled at the earliest.

In contrary to the director’s claim on Tuesday that the salary for the staff is pending for eight months and not 16 months, the employees clarified that the salary has not been paid since July 2019 even before the pandemic and that the last salary paid was for June 2019.

The release stated that chairman and the director are trying to suppress the real cause by making false allegations against the employees that the agitation was staged under the influence from some outside forces, which is truly uncalled for.

The director should not create fear and division among the staffs, it stated, adding that the protest staged by the staff on November 2 was a result of multiple false promises made by the chairman and the director.

The director had assured through media on Tuesday that he will try to pay the pending salary. However, the staff had been given similar assurance in the past though it was not materialised, the release contended.

“The chairman and the director are trying to shift blame on the pandemic for non-payment of salary when payment of salary has been extremely irregular long before the lockdown due to their mismanagement. Even during the time when salary could not be paid, the authorities continued to appoint new employees and huge sums were sought and taken in the name of welfare of the institute during recruitment,” it stated.

Demanding the release of pending salaries for 16 months, staffs of PDDUIAS locked the administrative block of the institute on November 2 and staged a sit-in protest. During the protest, the staffs also said that there are no welfare programmes being initiated at all for the staff and there is no EPF for the staff.

In a press conference on Tuesday, institute director RK Imotomba Singh said that the institute “will try” to provide the pending salary of eight months for the staff before Ningol Chakouba festival.

He also said that the salary for the eight months were withheld owing to the COVID-19 pandemic situation and the matter was discussed at a meeting held earlier.

PDDUIAS chairman and former Union minister Thounaojam Chaoba had also said that the institute is planning to recruit more teaching and non-teaching staff in the near future.