The Transporters and Drivers Council (TDC) said that it has lodged an FIR at Noney police station against the National Highway Infrastructure Development Corporation (NHIDCL). 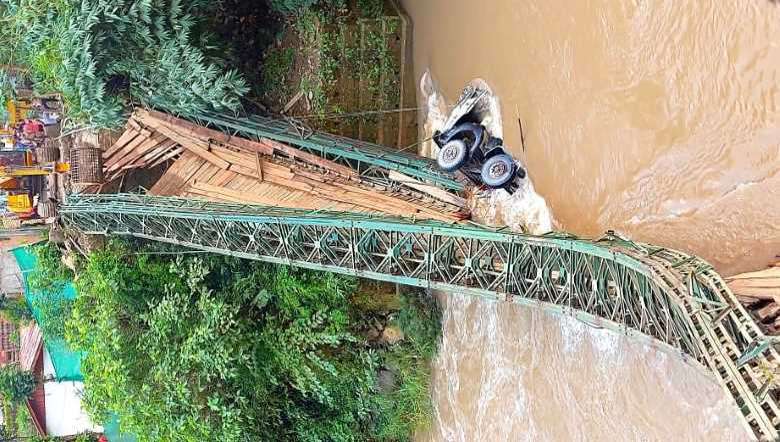 The body of the missing driver of a heavy vehicle that fell into the river when the Irang Bridge on Imphal-Jiribam road along the National Highway 37 collapsed on Sunday has been found, police said Wednesday.

The police said the body of the driver named Khamba Singh of Hojai, Assam was found at about 6.30 am Wednesday, along Irang river near Guigailong village, about 10 kilometer away from the place of the incident. The driver was missing since the day of the incident.

Police said that the body was spotted by the villagers this morning. To avoid the body from further floating along with the current, villagers block the body with bamboos and informed the Nungba police station. Later, a team of Nungba police rushed to the spot and recovered the body.

The Transporters and Drivers Council (TDC) said that it has lodged an FIR at Noney police station against the National Highway Infrastructure Development Corporation (NHIDCL). TDC president H Ranjit told mediapersons that NHIDCL should bear the responsibility for the collapse of the Irang bridge. The cause of the death of the driver is also due to the negligence of NHIDCL, he alleged.

Ranjit said the Manipur High Court in a PIL No 36 of 2018 directed officials of state and union on December 17, 2019 to take appropriate steps to maintain state and national highways. But NHIDCL officials, who are responsible for maintenance of Irang bridge, neglected their duty and due to the reason the bridge collapsed, causing the death of the driver, he alleged.

Saying that an FIR has been lodged at Noney police station against NHIDCL under section 120-B of IPC, Ranjit urged the authority concerned to book the officials who are responsible for the incident.

TDC condoled the death of Khamba, Ranjit said, adding that to bring the body to Imphal, a team of the council led by general secretary of All Manipur Road Transport Drivers and Motor Workers Union, Maimom Anil has left. After post mortem, the body will be handed over to the family members. He said the council has already informed the family members of Khamba and have reached Imphal.

TDC will hand over Rs 1 lakh as financial assistance to the family members of Khamba on Thursday, said Ranjit. He also said the state government has started the process of repairing the Irang Bridge through NHIDCL. The bridge parts will be carried through Khoupum.

Appealing the state government to complete repairing of Irang Bridge within a week and ahead of Ningol Chakouba, and to take necessary steps for the transporters who are stranded along NH-37, Ranjit the council is ready to provide necessary assistance to the NHIDCL if needed. The transporters will carry the bridge repairing parts without charging transportation charges, if assistance is sought by the NHIDCL, he added.