PDDUIAS “will try” to provide the pending salary of eight months for the staff before Ningol Chakouba festival, the institute director said. 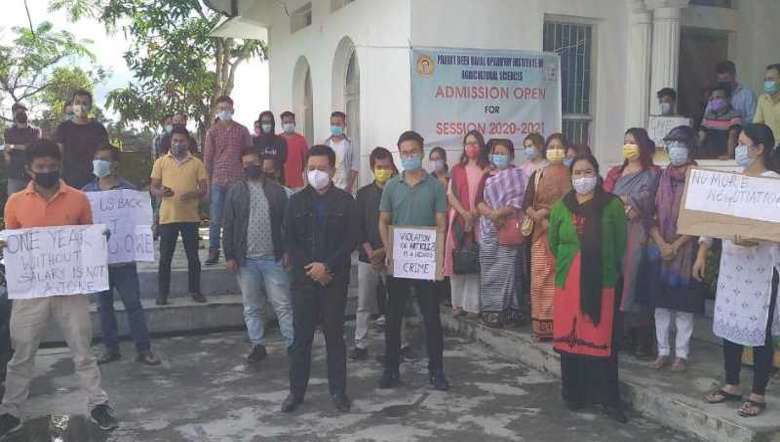 A day after the protest by the staffs of Pandit Deen Dayal Upadhyay Institute of Agricultural Science (PDDUIAS) at Utlou, Manipur, institute director RK Imotomba Singh claimed that the salary for the staff pending is for eight months and not 16 months as stated by the staffs. The institute “will try” to provide the pending salary of eight months for the staff before Ningol Chakouba festival, he said.

Imotomba Singh, speaking at a press conference held at its new office located at Utlou Tuesday, clarified that the salary for the staff is pending for eight months and not 16 months as stated by the protesting teaching and non-teaching staff of the PDDUIAS on Monday. It stated that the salary for the eight months were withheld owing to the COVID-19 pandemic situation and the matter was discussed at a meeting held earlier.

During a governing body meeting conducted on 28 October, Imotomba Singh said he had placed the issue of pending salary. The meeting had resolved that after getting the semester fees from the students the pending salary will be delivered under certain criteria, he said.

The institute does not have the benefit of any grant from the government. Staffs salary are given after collecting semester fees from the students and the money is utilised for the construction of infrastructure of the institute, he added.

PDDUIAS chairman and former Union minister TChhounaojam Chaoba said as the institute has already six streams on agriculture and allied subjects and after following the UGC norms, the strength of the staff is still less. The institute is planning to recruit more teaching and non-teaching staff in the near future.

Appealing the staff not to defame the institute, Chaoba said the institute has been taking a major role for the students who want to study agriculture and its allied subjects as there are limited seat at Central Agricultural University, Iroishemba.