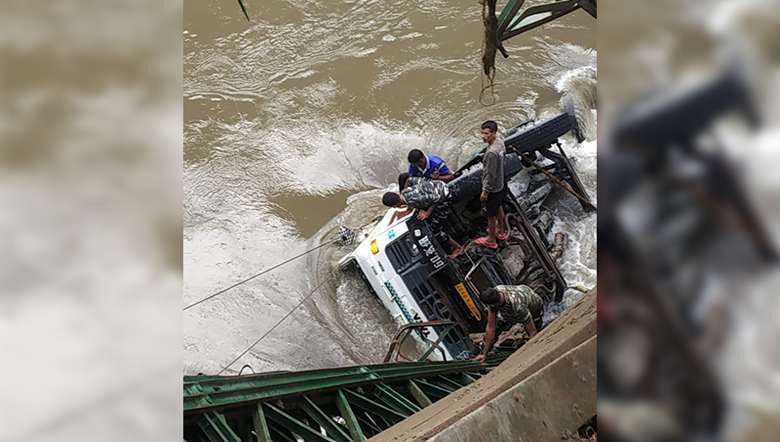 The National Highways and Infrastructure Development Corporation Ltd (NHIDCL) and the Road and Transport Ministry should take the responsibility for the collapse of Irang Bridgealong the National Highway 37 (Imphal-Jiribam road), said Transporters and Drivers’ Council (TDC) president H Ranjit.

Ranjit urged Chief Minister N Biren to ensure completion of repairing the bridge within one-two weeks before Ningol Chakkouba festival as the highway is one of the lifelines of Manipur.

Rajnit was speaking to the media at his office located at MG Avenue, Imphal on Sunday. He contended that the condition of Irang Bridge is not suitable to be on a national highway and should be at inter district roads.

“After considering the present condition of the bridge that collapsed on Sunday morning at about 6:30 am, it could be placed in a museum,” said Ranjit.

The Irang Bridge collapsed on Sunday morning and one loaded truck fell into the river. Driver of the loaded truck bearing registration number NL 07-A8937 is yet to be found though the assistant driver has been rescued by the villagers.

While saying that Irang Bridge has been in a deplorable condition for long, he contended that contractors are repairing by welding the bridge instead of replacing the affected parts. Repairing of the bridge has become a business for the contractors and NHIDCL, he added.

After considering the condition of road and bridges, TDC instructed the goods trucks to carry less quantity even less than the recommended quantity and transporters never violate the gazette notification of the ministry, he said.

Despite the ministry increasing the quantity of goods for carrying on the national highway to bring good economic condition, he lamented that the present condition of bridges constructed along the highway bring more problems to the transporters.

“No construction of bridges along the national highway including Barak and Makru bridges has been completed since 2010,” he contended and warned that TDC will take necessary steps if government and authority concerned failed to complete repairing of the bridge at the earliest.

Ranjit also said that recommendation of quantity of goods was fixed by the transport department by favouring the contractors when maintenance of the national highway was carried out by the Border Road Organisation (BRO). The status of the national highway should be maintained as per norms. Chief Minister N Biren should monitor the road condition from time to time, he urged.

A team of eight persons led by general secretary of All Manipur Road Transport Driver and Motor Union Maimom Anil has also reached the spot along with an ambulance to monitor the bridge collapse incident.