A combined team of Flying Squad and Lilong PS put a ban on the camps of election supporters. 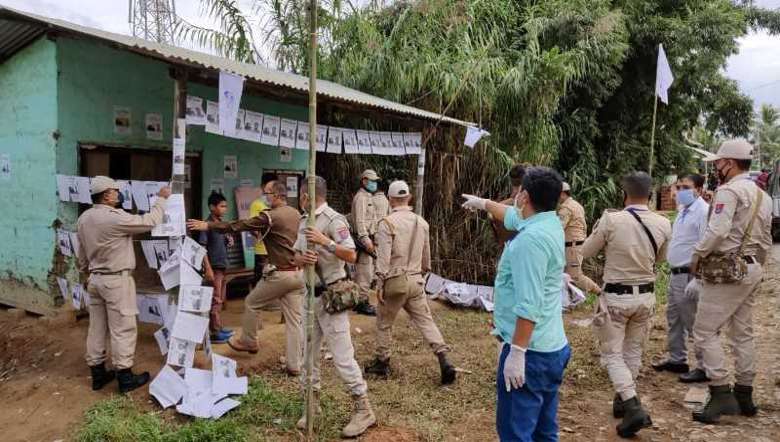 With a view to control unwanted incidents in connection with the by-election, Thoubal District Police under the supervision of SP, S Ibomcha continued to seize DIC liquors and other materials used in the manufacturing of the liquors.

According to police sources, on Sunday at around 7:20 am, they received reliable information that one person has been transporting a huge amount of Hamei along NH-102 in a black in coloured Bajaj Auto rickshaw bearing registration number MN 04G-0939. Immediately, a combined team of Khongjom PS led by SI, K Bikramjit Singh and Commando Thoubal conducted frisking and checking at the front of Dhaka Brickfield along NH 102 under Khongjom PS.

During the frisking and checking the said vehicle has been detained at the spot and found one individual namely Sapam Sanahal Devi, 40, wife of S Nimai  of Chingtham Bamol Leikai carrying 33 bags of yeast (Hamei) for use in the manufacturing of DIC liquors, the source added.

The seized items and the detained persons will be handed over to the Excise department, the source informed.

Meanwhile, a combined team of Flying Squad and Lilong PS put a ban on the camps of election supporters and removed posters, banners, flags and others at Nungei and Lilong Mayai Leikai areas in Lilong assembly constituency on Sunday, police sources said.