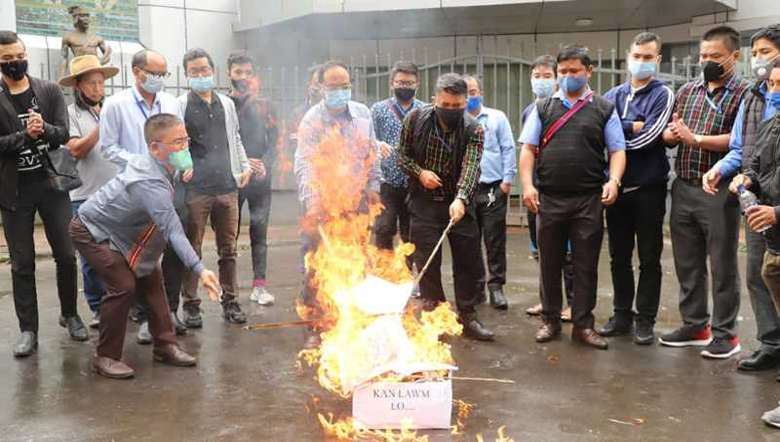 Students in Mizoram burnt copies of the ‘meeting minutes’ of the administrations of Mamit district (Mizoram) and Karimganj (Assam). The Mizo Zirlai Pawl (MZP) and the Mizo Students' Union (MSU), while burning the copies on Sunday, said they were doing it to protest the participation of the Mamit deputy commissioner in the said meeting that was held on Saturday.

The MZP burned the copies near Vanapa Hall in Aizawl while the MSU burnt the copies in front of the Mizoram chief minister’s office. The two student bodies opposed any meeting between Assam and Mizoram administrations before blockade on the National Highway-306 if lifted and the inter-state border dispute is resolved.

MSU leaders said officials of Mamit district ignored the call of the people not to hold any meeting with their Assam counterpart as long as blockade prevails.

The Assam-Mizoram border dispute has been going on for a long time. Troubles crop up from time to time. The issue turned volatile recently.

The Mizoram government had said a few days ago that it “has accepted” the demarcation notified in 1875 under the Bengal Eastern Frontier Regulation (BEFR) of 1873 as the actual boundary of Mizoram and Assam. According to the state government, it is a “historical boundary of the state which has been accepted since the forefathers of Mizos”.

People from Assam side have been imposing blockade on National Highway-306 at Lailapur and highways linking Mizoram’s Bairabi village with Assam's Hailaikandi district since a few days ago.

The Mizoram government had stated that it was trying its best so that the transportation of essential commodities was not affected.