Several migratory birds, including Akhuaipuina, arrived in Tamenglong and other parts of Northeast India since the onset of October and is likely to roost till the end of November. 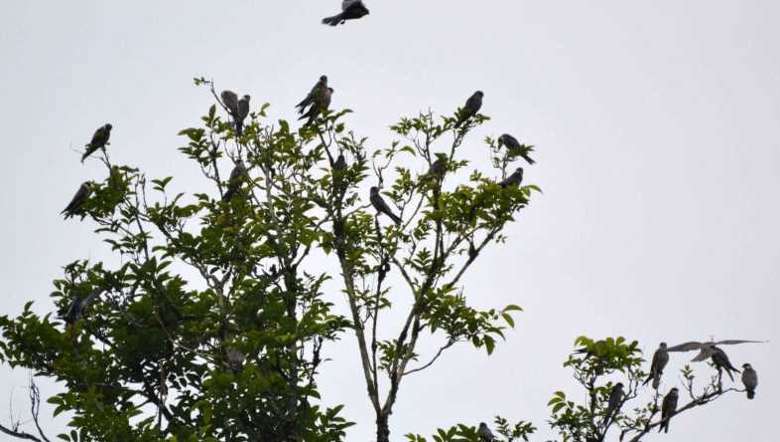 To ensure the safety of ‘Akhuaipuina’ (Amur falcon) which have returned to Tamenglong district for the winter months, district magistrate Armstrong Pame on Saturday issued an order to ban all kinds of hunting and killing of wild animals and birds in Tamenglong district of Manipur.

“This period is considered as crucial in the life cycle of Amur falcons, and hunting, killing and destruction of wildlife (including migratory birds Amur falcon (Falco amurensis) in any way for food or possession or otherwise is a punishable offence under Sections 50 and 51 of the Wildlife Protection Act, 1972,” said Pame.

Pame also directed sub-divisional officers of Tamenglong to take appropriate action against the individual who violates the order, in accordance with the existing law and in consultation with the district forest officer of Tamenglong.

District forest officer of Tamenglong, Kh Hitler Singh has also urged all the people of the district to protect wildlife, including Amur falcons.

Speaking exclusively to Imphal Free Press, Hitler said that Tamenglong is very rich in biodiversity and people should preserve the forest and wildlife for future generations.

“Due to the recent successful return of Chiulon and Irang Amur falcons which are tagged with satellite transmitters, many national and international conservators are looking towards Tamenglong district. The district is now in the world map of migratory species conservation. India is a signatory country of convention of migratory species conservation, and further Amur falcons are included in Schedule IV of Wildlife Protection Act 1972 as protected birds and we all need to support the conservation, protection of Amur falcons in Tamenglong district of Manipur,’’ said Hitler.

The DFO also informed that staff of Tamenglong Forest Division are keeping vigil and patrolling in the roosting site of Puching village to make sure no Akhuaipuina is killed. In Puching village in Tamenglong district both Radio tagged ‘Chiulon’ and ‘Irang’ are roosting and stationed along Irang river bank.

Hitler further said that the other three Radio tagged birds ‘Puching’ and ‘Phalong’ have lost contact just after few days of the release. However, ‘Barak’ gave data till May 29 but lost contact at Meghalaya border with Bangladesh while returning from South Africa towards its breeding ground.

A peculiar migratory bird locally called ‘Akhuaipuina’ (Amur falcon) is a trans national species which is very important for its role in ecosystem services such as controlling pests, grasshoppers, termites, mice etc. These birds breed in Siberia, Mongolia and East China. There they stayed from May to September. From October to November they stayed in North East India. ‘Akhuaipuina’ migrated to South Africa, stayed there from November to April. Whereever they go they feed on pests and they help in the increase in production of crops both agriculture and horticulture.